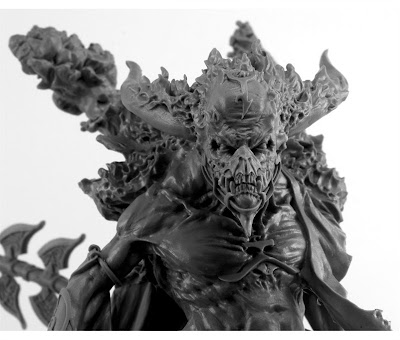 Warhammer Forge is releasing this model in limited numbers at Games Day UK, but is available for pre-orders now.  like normal the details are amazing. 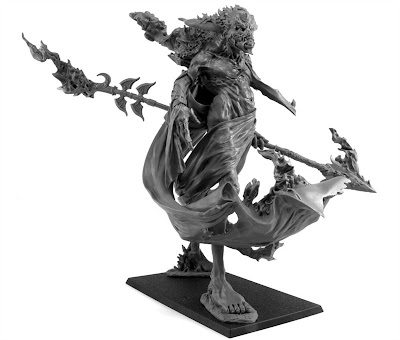 via Warhammer Forge http://www.forgeworld.co.uk/New_Stuff/INCARNATE_ELEMENTAL_OF_FIRE.html
Incarnate Elemental of Fire
The wind of Aqshy is one of the most destructive of the winds of magic; all consuming and insatiably hungry it is comprised purely of fire and blazing heat. The Incarnate Elemental that is born of it embodies this terrible wrath, known in the lore and legend of the Empire as the Charred One, Jack O’Cinders or the Black Harvestman.

Summoned within a colossal pyre, the Incarnate Elemental of Fire towers over the battlefield. Its lean and terrible form, cinder-black and ash-strewn, radiates phenomenal heat and is capable of unleashing a firestorm that none can withstand. Whispered tales still tell of the wrath of the Bright College who unleashed this unmerciful horror upon the towns and villages of rival factions during the fratricidal wars that wracked the Empire in ages past.

The Incarnate Elemental of Fire is a multi-part resin model designed by Steve Whitehead. This incredibly detailed miniature stands an impressive 6" (150 mm) tall, and makes a suitably imposing centrepiece for any Warhammer army. Rules for this magical creature can be found in Monstrous Arcanum, and it is available to pre-order now for despatch from Friday 28th September.

The Incarnate Elemental of Fire will also be on sale on the Forge World stand at Games Day UK on Sunday 23rd September in limited numbers.
9/07/2012
Natfka
Announcements, News Headlines, Warhammer Forge