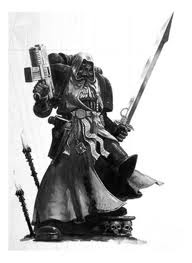 These are a little bit vague and based on artwork for the Dark Angels, but it definitely leads to some interesting ideas and rumors. Definitely worth checking out on the Dark Angel front......


Please remember that these are rumors, and were taken from Warseer's forums. The last couple bits were answering questions, I included the questions or comments and responses.

via Stickmonkey on Warseer
Ok boys and girls. Not going so far as to call these rumors, as I have word only of some drawn art assets, but it could point to potential models and rules so passing it along.

First:
Ravenwing.
Got some art of an attack bike with what could be a plasma blaster in the gunner side. definitely plasma. but multiple barrels. could also just be TLPG but the source said it was one weapon not side by side when asked.
Second shot has a squadron of bikes, 6 bikes + attack bike riding down orks, in the air is a landspeeder, but it has underslung missle pods. Could certainly be creative license.

Deathwing.
Got art of Termie with a plasma cannon, back pack and hoses running behind.
Termies fighting chaos, one with LC and Cyclone launcher, the rest SB and PF, SGT in front with PS. Lends credence to mixed squads being present.

Other.
Art of supposed new flyer does very much resemble the lightning, with a landspeeder-esque body.
Shot of chaplain in TA fighting a hellbrute. So obviously wasn't meant for DV as that chaplain is PA.
Techmarine firing unknown weapon. Looks like a punisher cannon. supported with servo harness and held at hip. one servo arm is feeding belt ammo into it.


Like I said, no idea if any of this will be used, but it certainly is interesting towards rumors.


Could that Techmarine weapon be the new siege weapon you mentioned earlier?
Doubtful, the siege weapon was described as a tracked platform...like the thunderfire. this art is a single techmarine with a heavy weapon.

One thing, I've gotten a lot of rumors winging my way of techmarines. IMHO I am not certain some of it might not be for something else down the road. There is no particular fluff reason I'm aware of DA would have a greater than normal emphasis on TM. Iron hands, sure. But not DA.

Edit: Or possible as a first founding chapter there is just more artificer armor present and the art is being mistaken for techmarines...


The new aircraft sounds like it's sleeker than the Storm Talon, which is also promising.
Don't count on it...my source called it a "Pregnant Albatross". Said it has a big engine intake behind the cockpit.