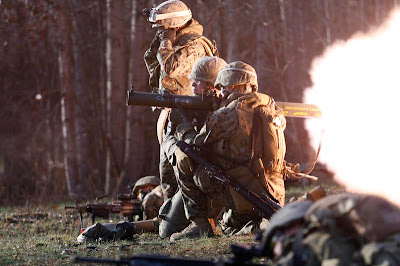 There is an article over at Slate that delves into the world of Warhammer 40k. Yes, I know....  "not another news story about a news story". However, this one is nice, in that it discusses US marines that are deployed for the most part and how they love the hobby and game. So while I am going to quote a couple small sections here, please head on over and read the article.


via Slate Please follow the link for the story.
http://www.slate.com/articles/life/gaming/2012/09/warhammer_40k_why_american_troops_love_to_play_a_game_featuring_orks_necrons_and_space_marines_.html

As an Army officer, Maj. Stephen D. Carey has served tours of duty in Iraq and Afghanistan. In his spare time, he fights a different kind of battle, one that rages in the apocalyptic 41st millennium. The distant future would be a terrifying realm for a mere mortal, what with all the Necrons, Tyranids, and Tau on the loose. To survive the war-torn galaxy, Carey enlists the help of marauding, green-skinned Orks.

40K may not be a true simulation of armed conflict, but it’s part of a centuries-long tradition of war games. After World War II, U.S. Navy Adm. Chester W. Nimitz credited gaming for helping the Allies prepare. “The war with Japan had been re-enacted in the game rooms here by so many people and in so many different ways,” he said, “that nothing that happened during the war was a surprise—absolutely nothing except the kamikaze tactics towards the end of the war; we had not visualized those.”
9/13/2012
Natfka
6th Edition, News Headlines