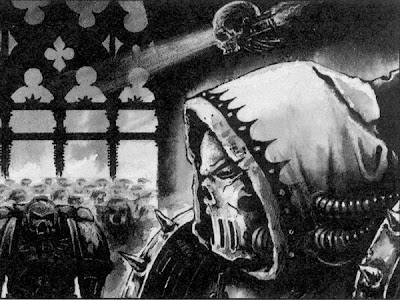 Here is a second set of rumors that are mostly in response to Stickmonkey's rumors earlier in the week. Now the big questions comes down to this before anything else.....


via Tasty Taste over at Blood of Kittens
Let us start with the Dark Angel  release of November… all I can say is this…….no
Dark Angels will be coming out but won’t out till Jan-Feb 2013


I actually don’t think they are getting a Flyer.
Inner Circle sorta fits with what I have been hearing.
Super Techmarine sounds like the answer to the Warpsmith.
Fortification is pretty solid, but don’t expect army specific fortifications just yet it should be an addition to the current list.

Here is some tip bits of what I know about the new Dark Angel codex that should hold you over.
Expect Dark Angels to be the ones that get Hatred: Chaos Space Marines.
In fact, expect a “hatred type” trend to continue especially considering the addition of Allies.

GW wants (along fluff lines) to have armies counter other armies in extremely specific ways. In addition, and I am going to be nice and vague about this, but I bet you can figure it out if you do some research. The new major unit for Dark Angels is something  Games Workshop is currently in court over over with a certain other company that already made them. If that doesn’t ring a bell, let me say it is a unit that perhaps only the Masters of the 2nd Companies would know about.