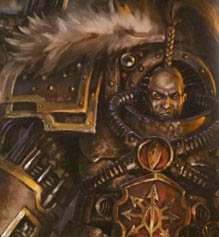 Tired from 40k all night (2 2500pt games in one night), so lets get right down to it. Abbadon rumors are hitting if these turn out, he will be a beast in close combat.


Putting an end to this comment section and locking the thread.

Rumor are rumors, but I have just disproved them they are fabrications.

despicable fury: abaddon true hatred for the imperium is so deep that no other chaos space marine can match it. to represent this for each imperium enemy abbadon kills he makes an additional attack & follow all the rules of his daemon weapon (so like the furioso just with abbadon)

the second gift of tzeench: abaddon has pleased tzeench with his helping in the great game & so has granted his own personal physic aura. to represent this when abaddon suffers an unsaved wound he may re roll it (including invulnerable saves). But if abbadon fails his save again then he suffers the wound & loses an additional wound due to tzeench feeling betrayed for giving him a second gift.

none can stand the will of the dark gods: when abbadon issues a challenge or accepts a challenge (as described on page X) he ignores his despicable fury rule and instead counts his weapon as being a force weapon (which still requires a point of warp charge)

Fluff Changes
When abbadon takes a critical imperium planet he is then spoken to by tzeench personal herald to do a certain task (sorry cannot tell you that part) in the end abbadon completes this task and tzeench shows abbadon his vision of the great transformation and abbadon sitting on the golden throne along side the dead emperor. thus tzeench gives abbadon a second gift, as the planet abbadon has taken has pleased tzeench and angered the other gods without abbadon knowing a thing.

and apparently the chaos codex is super close, but white dwarf pictures will be hard to get seeing as they have been given only to (suspected workers) and the shops will receive them a day before release.
9/09/2012
Natfka
40k, 6th Edition, Chaos Space Marines, Rumors, Warhammer 40k