CSM: A Couple More Pics and some Rules 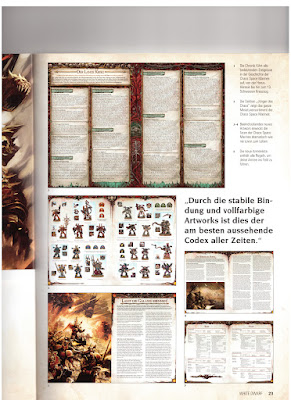 There is just so much out there right now on the latest White Dwarf regarding the Chaos Space Marine codex. I even missed some of it. Here are a couple pics and a few rules that are floating around that have not been posted here....... (at least I dont think they have) 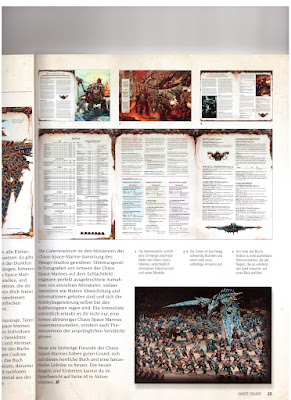 If the squad numbers 10 more, one model can exchange its special weapon:

These are the more generic units in the book. The terminators and chosen are basic veterans, not cult troops, and thus have a variety of abilities and wargear, but nothing too special. I'd bet that the page following this one covers the 4 cult troops.

As for the other unit entries,
Possessed are Vendetta price for base champion +4, can add more. Looks like bolt pistol CCW base.
Champion can take mutation
Marks plus Icons
Veterans of the Long War
Dedicated Rhino.

Mutilators look like rhino price for one, can add more
Marks
Veterans of the long war

Chosen- 5 points less than a base squad of terminators for a champion +4 more. Can add more for looks like 1 point more than now
bolter, bolt pistol, CCW, frag and krak nades standard.
Up to five models (maybe? hard to read) may do the following:
replace bolt pistol with plasma pistol
replace ccw with power weapon, LC, or power fist
replace bolter, pistol, and ccw for pair of claws
One may upgrade to take the following
flamer
heavy bolter
meltagun
plasmagun
autocannon
lascannon
missile launcher
champion can replace a ranged weapon for a melee weapon on the wargear list (not sure about that one)
champion can take gift of mutation
champion can take melta bombs
marks and icon options
Veterans of the long war
Chaos rhino as dedicated.