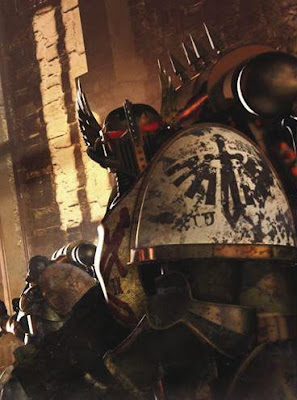 A follow up from the previous Dark Angel rumor set, we have a slight correction on his rumor release date. Otherwise these are some questions that were answered by Stickmonkey regarding Dark Angels.

via Stickmonkey over at Warseer
I just heard a rumor that there is a AA option for DA dreads...one that will likely make it to all chapters eventually.

So PA command squad could get a single heavy weapon, apoth, standard, etc. A TA squad the same, but that the RW command squad was 3 bikes and a attack bike w hvy weapon, or 5 bikes, but not a LS. The history here does not point to GW breaking the concept that a RW full squad is still 10 man strong, 6 bikes, a AB, and a LS.

DA version of Vanguard?
Most like. But they have some form of hunters from hyperspace type rule in addition. And they might have some new DA special weapons...dark claws or dark swords, you know, to egg on the stereotypes..

Heard a deviant rumor that they have meltagun sponsons as an option too...
So PC, AC, LasC w HB, HF, MG sponsons. Supposed to be a new kit with BA Pred style sponsons and DA icons included.

Dreadnoughts
Sounds like the HVY slot dread is the standard, and the specialist DA dread is Elite. and either can be upgraded to ven...for what that's worth now.
9/28/2012
Natfka
40k, 6th Edition, Dark Angels, Rumors, Warhammer 40k