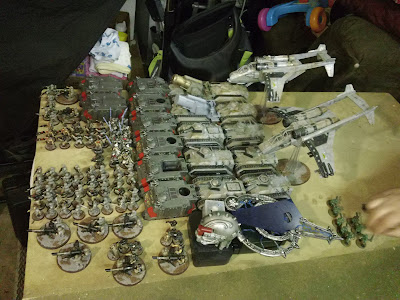 Its been a busy week with both the release of the new White Dwarf, and with some huge releases alongside Games Day UK. To top it off, it was another late night 40k night that lasted almost until the sun came up.


Mechanized Lists
Lets start this week discussing MSU, Massed Infantry, and Armoured Companies. I am still trying all the extreme sides of list types to see where I fall. Everything from assault lists, to extreme shooting and every inch in-between. Why? because no matter how much you theorize, there is a way to push the limits of 6th edition in new directions and new ways. There are just that many options out there, and I for one love the way it works.

So last night I played the list in the picture. Yes, that was a single game army list. Grey Knights with allied Imperial Guard. It was so heavy mechanized, that I thought for sure it would show utter and complete failure on a new level, especially given the opponent.

The opposition forces on the other side of the table was another extreme list with more heavy weaponry than you will ever see on a tabletop. All of that combined with aegis defense lines, 4 company commanders for get back into the fights, it was a massively heavy list with guns and fodder ablaze.

He came in at a whooping 164 infantry models, and maxed out platoons heavy weapon teams. So to put it bluntly, he was getting a 2+ cover save every round, and then ordering his men back up into fight. They would then proceed to unleash a massive wave of heavy guns at my lines.

Two things I have to say about what I fielded. Number one, is that somehow it worked, and worked well. I was basically just saying ok, take your 2+ saves all day, I can live with that. Somehow, at the end of the show, against a list that theoretically should of been destroyed, I was able to pull off a 4-2 victory in a bases style game. He even went first.

Conclusion: A heavy armoured list does good in 6th. I do not yet know where that fine line is, between not enough tanks to work and too many, but putting 20 on the table does and did work well.

Points: Av12 is still strong. Passengers being stunned after disembarking (and not being able to fire) is harsh, but there are ways around that. Glancing hits on vehicles and still being able to run around is huge. Being able to get cover is very easy now, and seems to come into play a lot more in 6th than it did in 5th.

The Good, the Bad, the Ugly
The Good
Excellent QnA session today. I just want to say that I am still working on the compilation, and that will include many questions that were not answered during that session, but were handled after the event. I want to thank people for being on their best behavior(which is normal here on this site). So thank you for helping that go well, and hopefully if your questions were not answered during that session, then I hope they were part of the group that were answered via email to me.

A big thanks to our guest to woke up to go to Games Day UK, worked hard on his own stuff, and spent the extra time to come over and join us for a couple late night hours. Also I apologize to his wife, and thank her for his time.

The Bad
Please remember that this site is a No Drama zone, and I really do not have any tolerance for it. We had a little bit of that earlier today, and if I was not so exhausted from no sleep I would of been on it a little faster.
If you are new here and do not know what the hell I am talking about here is a link
http://natfka.blogspot.com/2012/09/punching-bags-and-commentary.html

The Ugly
Today during our QnA session we had one problem, and like normal, I submitted his log in/ ip address as spam. I really dislike doing this, as I feel it locks a person out and denies the possibility of some good ideas and input. We all lose out when this happens.

Chaos Space Marines
I am overly excited about this release, and of course will own the codex. Will I get back into the depths of Chaos Space Marines? I do not know for sure yet. I like the way everything feels, and the flexibility and variation of what the codex will bring. Above all else, I think the codex will be a more difficult to play than some of the past codices, which is nice. This is difficulty comes from the primary massive amount of options available and the no obvious "take and spam this unit to win" in the codex.

While I am going to hold my reviews and ideas on the codex for now, its looking like an extremely well put together codex, that will take some creativity and tactics to dominate the tabletop.

New Camera
Its here, and it does take amazingly better pictures and video than what I have been using. So I am trying hard to get it all together so that I can show off what it can do. Yes the pic at the top of the article is from that camera. A lot more to come.
9/23/2012
Natfka
Presence of Faeit