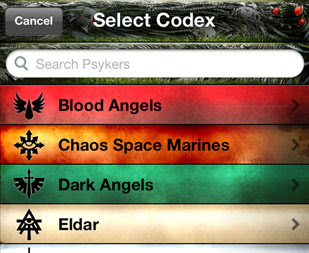 Now this is a logical step that I just did not see coming. Games Workshop now has apps for the iphone and ipod. I know many of you are like "what?" yes, that means that we will be able to access digital products through our phone. So Yes the future is here.......


My request for Games Workshop.... we need an army builder equivalent so that if we stuck somewhere (office, doctors, weddings and more), we can work on our army lists. And yes, I want to do be able to do it with my phone, so people think I am doing something important.

It does look like its time though that I upgrade myself from my crappy flip phone to a new iphone. I have been considering this for a long time, but as a financial planner its hard to swallow and justify. My leap is coming.

I know that those of you that have blackberry's, blueberry's, and what ever other type of phones are out there, will not care for this. My advice..... be patient. Or buy a new iphone 5.

via White Dwarf Daily
We don't normally write a blog post on Saturday, but today we've got some really big news for you all. Today we launch our first App for iPhone and iPod - the Psychic Powers App.

Initially I thought this was just a cunning way to store your psychic powers on an iPhone, but I couldn't have been more wrong. When you open the App you're greeted by a list of all the races in the Warhammer 40,000 game that have access to psychic powers. After choosing your race, you are then asked which Psyker you would like to use. As an example, Eldar have access to Farseers and Eldrad Ulthran, while Space Marines have access to Librarians and Tigurius. After selecting your Psyker you then get to randomly generate their powers from the lists available to them. You can even take a picture of your Psyker with your iPhone, save the picture in the App and use the picture of your model to remind you which Psyker is which in your game. It's all very clever stuff.

But the fun doesn't stop there. I'm pretty good at forgetting stuff mid-battle (usually weapon destroyed results - oops) and this App is incredibly useful for making sure you use your Psykers properly. While I personally don't own an iPhone (or anything beginning with 'i' for that matter), Andrew whipped out his iPhones and gave the App a quick go to see how it worked.

Each turn the App can be reset to show you how much Warp Charge each of your Psykers has left for casting their powers. Every time you use one of their powers - many of which are accompanied by sound effects such as crackling lightning or the screams of the damned - the amount of Warp Charge decreases until you run out for that turn. Each psychic power also has a summary of it's effects so you can check out all the relevant details and make sure you're getting the most bang for your buck (or destruction for your Warp Charge, whichever analogy works best).

This App includes all of the psychic powers from the Warhammer 40,000 Rulebook and all the current Codexes that we have available, making this App an incredibly useful gaming tool. You can download the Psychic Powers App directly from the App store.

And while we're on the subject of clever digital stuff, don't forget that we've got a growing range of Digital Products available to download for your iPads from the Apple iBookstore, including Codexes, army books, painting guides, tacticas, Scrolls of Binding and rules for using scenery in your games of Warhammer. To see what we've got available check out our Digital Products page here.