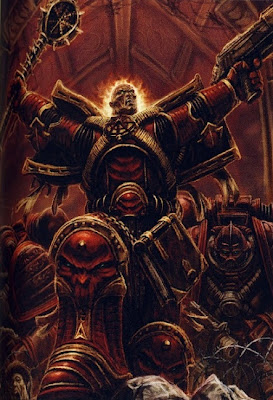 Earlier today we had a rumor set that gave us some information regarding Dark Apostles and Daemon Princes from the Chaos Codex. I ran it by some other sources and there were some things they corrected, and some things that were said to be right on the money. Lets take a look.


via Faeit 212 (a Must Remain Anonymous Source)
Dark Apostles
It's correct in how they are purchased and that they confer abilities to the unit they're in.

They universally confer fearless(because they are fearless) and furious charge.  Beyond those two, the abilities that they add to the unit are not as good as the ones you have posted, and in some cases not even remotely similar.

Dark Apostles's are more along the lines of watered down cult troops, but if added to a cult unit they still "bolster" the cult units effects.

i.e. Dark Apostle in a Plague Marine unit get FnP 4+ instead of 5+, or confers a 5+ to a unit of marines or cultists.

Let me be frank though and clarify that there is no unit that gets rampage that is not limited to 3 models.  It's reserved for independent characters, walkers, monstrous creatures and some multi-wound, small number units.

Your unit of 8 khorne berserkers doesn't potentially double in effectiveness by taking less of them.


Daemon Princes are exalted CSM's, not Daemon's (though they have the Daemon rules), so they are not the same as from the Daemon codex.  They have clear heritage as space marines.

This is the previous rumor referenced above, here for your convenience.
via Faeit 212 (Anonymous)the chaos space marine daemon prince being increased by 40pts! & having the lash ability taken away for good (apparently to cheesy) the daemon prince will have to pay the same points for wings as a daemons prince from the chaos daemons codex so it is is more balanced.
dark Apostles will be the same as the blood angels sangunary priest (can have up to 3 & they count as 1 elite)the apostle will only give you abilities depending on the mark it has taken.
the list is as follows :Undivided : unit becomes fearless & relentless and gain feel no painkhorne : unit gains rage , furious charge & rampage nurgle: unit gains feel no pain , it will not die and slow and purposeful (if it joins a unit with feel no pain already then the feel no pain roll is one lower than normal)tzeench: units gains a 5+ invulnerable save that can be re rolled if failed (unit and apostle can re roll once per game)slannesh: unit gains fleet , + 1 initiative and rending
9/08/2012
Natfka
40k, 6th Edition, Chaos Space Marines, Rumors, Warhammer 40k