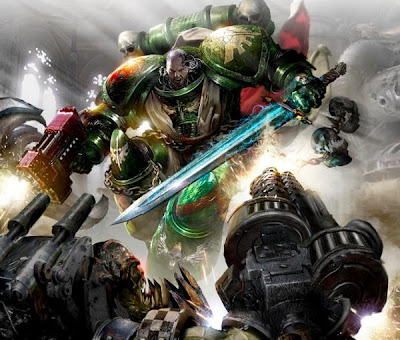 The Chaos Space Marine codex is very much here. In case you were concerned that this was it for the rest of 2012....... Worry no longer. More rumors are now saying that indeed, the Dark Angel codex will be here soon.

via Stickmonkey over on Warseer
Right now info I have is we will see DA in November, and we can play with them before Christmas.

From the rules rumor dept I have a few bits, please bear in mind these are only rumors:

Elite:
Techmarine
Chaplains (x3 can function independently like sanguinary priests in BA, or form a unit w special rules). Only characters if independent.
Inner circle unit ( name is not known) tasked with hunting down one enemy unit, special rules for doing so. Can death wing assault, can assault on deep strike. But glass cannon, great in assault, but standard PA so will be easily shot up.
Brother-interrogators - this unit wears chaplain style death masks, but are not chaplains, they are a specialist unit adept at near range combat, standard armament is dual bolt pistols and power maul. Can upgrade pistols.
Veterans
Dreadnought
Scouts

Troops:
Terminators
Tactical squad
Ravenwing Bike squad not sure how it differs from ravenwing assault squad.

Rumor is there is something else for the heavy slot too, but no info specific to it.

That's enough to chew on for now....might be a few more surprises...and this is still just RUMOR folks...names and all.

Land speeder storm was also in the FA slot, according to sources.

No mention of excessive plasma-ness in this round.

Phil did say that. However, there has also been much debate over getting appropriate xenos fortifications into the mix. They have eldar, ork and tyranid terrain just waiting to be produced that I know of. Maybe next summer will be summer of fortifications. :P

Also in discussions at Games Day, the StormTalon is to remain a Codex Space Marines only vehicle.

Mixed terminator squads: Earlier rumor was mixed squad remained, however, cyclones could only be taken on SB marines. I haven't heard any more on this, that was a while ago, it really could go either way. I wouldn't build any more or tear apart those you have just yet.

the company master for DA in TA will be a single plastic character blister. It will include some options for loadout but not all, but will be blinged out like the DV termies.

the new landspeeder
Its bigger than the StormTalon, but the fuselage has a landspeeder style to it. I took it to mean squarish. The wings are supposedly fanned forward like an Aquila. And others have mentioned it would not take much to make this look like the chapter symbol, but I haven't heard anything on this.

The single character sprues have plenty of space on them for options. Look at what is packed onto a character finecast sprue. You have Arjak in a smaller finecast sprue and he's in TA, then you have Draigo with head swaps. I don't find it at all implausible they could have 2-3 weapons, perhaps a sword, a storm bolter or a combi weapon all on the sprue. Also, IIRC there was a single sprue terminator released with WD with the starter release for 5th. Granted, it was just a starter terminator, but it certainly fits in the character sprue sized thoughts.