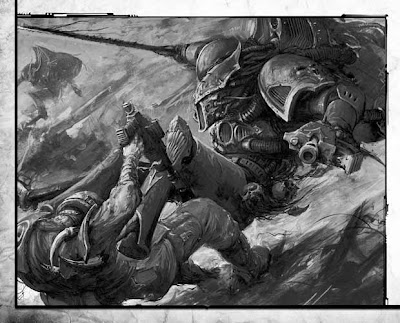 This looks very solid on a release date for both the Chaos Space Marine codex and Forgeworld's Horus Heresy book 1, Betrayal. We have had release dates in the past, that have either been moved, or altered depending on what was coming out, but this looks like it is the most logical date yet.


This would also mean that we would see some heavy leaks on the chaos marine codex starting the 23rd of September. I only wish I was able to make Games Day UK. There are some disadvantages to living on the other side of the world.

Please remember that these are rumors, but as time moves forward, we are looking at a much more finalized set of dates. Of course if anything changes I will be on it, and let you know. So I wonder what is the BIG 40k release for November?

This is from a trusted source. So this the most current information I can get, and what I can release.

via Faeit 212 (a Must Remain Anonymous Source)
There's been a big white dwarf overhaul for October but it's now finished and finalized.

Chaos Space Marines are available for pre-order on the 29th of September and for sale retail on the 6th of October.

They will be present at Games Day UK however, for anyone who wants to see / read but will not be for sale or pre-order even for people who are there in person.

The Horus Heresy Book 1 - Betrayal will share the same release dates, except that there will be a limited number for sale at Games Day.

The entire range of new models will be released on the 6th and 20th (Meaning that every unit entry in the book will have an available box set by the 20th.  Some kits that are being redone in a year or more time are not included in what I mean when I say "entire range.")

This has been crunched to make room for another BIG 40k release in November.