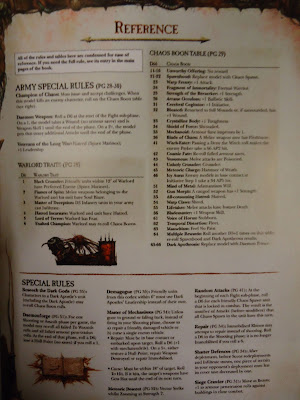 Army special rules, marks, icons and more are here from the White Dwarf. Once again apparently there are lots of people with this White Dwarf, and apparently I get left out of the fun. However there are lots of people posting these things online in photo albums, forums, and other sites, so we get to share in the fun for a short bit until we get our copies on Saturday.

These are via Tompi3 from his online photo album. Some of these duplicate, and some are new to me. Enjoy.

Warlord Traits
1 - Friendly units within 12" of Warlord have Preferred Enemy (Space Marines)
2 - Melee weapons belonging to the Warlord and his unit have Soulblaze
3 - D3 infantry units may infiltrate (could this be new Creed???)
4 - Warlord and unit have hatred (everything!)
5 - Warlord causes Fear
6 - Warlord may re-roll Chaos Boons

Thanks to Bramgaunt:
So. Here are Pschic Powers and some special rules. (Note that I translate them myself, so names may differ in the actual Codex...)

Gifts of Chaos
Aura of Dark Glory: 5+ Invulnerable Save
Gift of Mutation: Ahead of Deployment, roll once on the "Rewards of Chaos" table
Battle-familiar: Model gains 2 additional S4 AP- attacks
Wizard's familiar: Model may reroll failed Psychic tests
Warpblood: Everyime a model with Warpblood suffers an unsaved wound, the unit that caused this wound suffers 1 S3 AP4 hit. (it appears this is not limited to close combat)

Icons of Chaos
All Icons grant +1 on Combat Resolution
Icon of Revenge: Unit is Fearless
Icon of Flames: Mark of Tzeentch Only: Boltguns, Heavy Boltguns and Bolt Pistols have the Soul Blaze Special Rule
Icon of Rage: Furious Charge, Unit may reroll Charge Distance
Icon of Despair: Mark of Nurgle only: Unit causes Fear
Icon of Ecess: Mark of Slaanesh Only: Unit gains Feel no Pain

Mark of Nurgle, Mark of Tzeentch, Mark of Slaanesh: If they are given to a psyker, he must chose at least 1 psychic power of the appendant dicipline.

Psyker: May chose psyonic powers from pyromancy, biomancy or telepathy. If he's a demon of Nurgle, Slaanesh or Tzeentch he must chose at least 1 psycic power from the appendant dicipline.


Vehicle Upgrades:
Destroyer-Blades: Causes D6 S5 AP - hits while performing a Tank shock. If a Unit choses Death or Glory it suffers 2D6 hits instead
Warpflames: All ranged weapons have the Soul Blaze special rule
Whipping Tentacles: Every model suffers -1 attack for each whipping tentacle it has base contact to. (very strange wording here...)
Twin linked Boltgun: Duh.
Siege shield: Vehicle automatically passes dangerous terrain tests
Demon Engine: BS 3. Ignores Crew stunned and Crew shaken on rolls of 2+. When a unit embarks, roll a D6. On a roll of 1 you remove 1 random model as a casulty, and the vehicle regains 1 Hullpoint.
Magma-cutters. If a Maulerfiend with Magmacutters hits with at least one of it's attacks, it generates 1 extra attack. If it hits with all of it's attacks, it generates 2 additional attacks. These attacks have Initiative 1, S8, AP1 and armorbane.
Sonic Blaster: Enemy units within 6" may not perform defensive fire.

Might of the Soulforge: Once per game, at the beginning of a shooting or close combat phase, a model may unleash the might of the Soulforge to reroll all failed to wound/armor penetration rolls. It suffers a glancing hit at a roll of 1 at the end of the phase.

Master of Machines: A Warpsmith may try to repair a friendly vehicle or curse an enemy vehicle.
repair: Needs to be in b2b or within the vehicle. On a roll of 5+ (4+ with mechadrites) he restores a hullpoint or removes one weapon destroyed/immobilized result.
Curse: Shooting attack: 18" range. If it hits, the enemy vehicles weapons have the 'gets hot' special rule.

1-2: Gift of Mutation: Blessing: Focus 1:
Friendly Character within 2" suffers a S4 AP-hit and ma roll on the "Rewards of Chaos" table

3-4: Bolt of Corruption: Beam, Focus1
18", S8, AP1, Detonation (If the target is an enemy vehicle and suffers a "Vehicle explodes" result the radius of the blast is 2d6 inches instead of D6 inches)

1-2: Weapon Virus: Curse, Fokus 1
Range 24". All ranged weapons in the enemy unit have the "gets hot" special rule 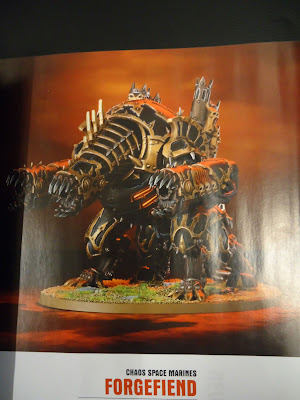 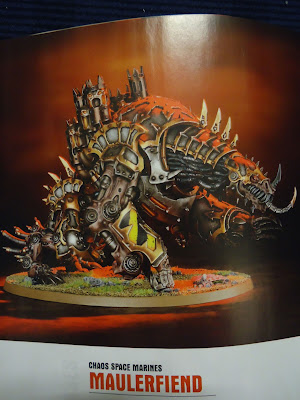 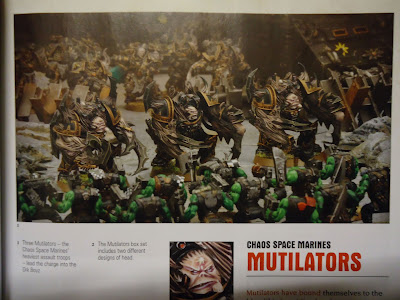 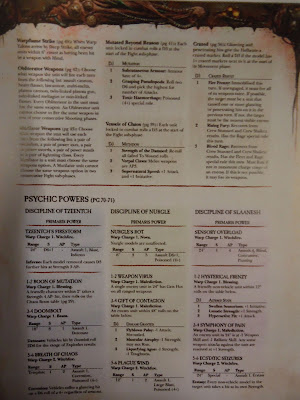 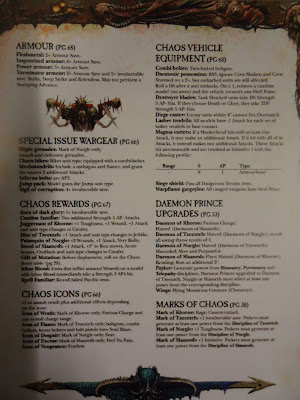 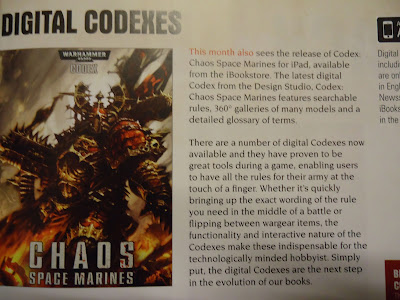 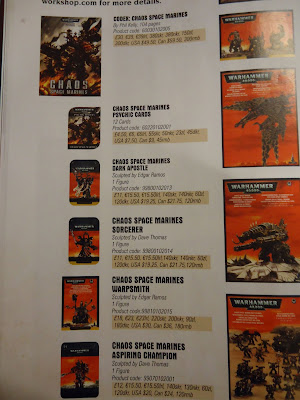 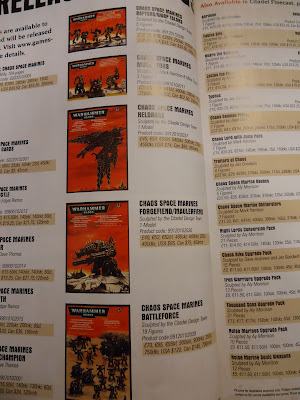 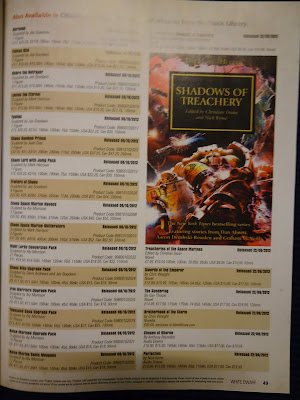 Here are some additional pics....... from http://astropate.blogspot.com/2012/09/kit-di-modifica-per-gli-space-marine.html 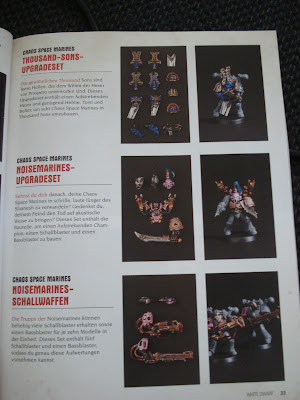 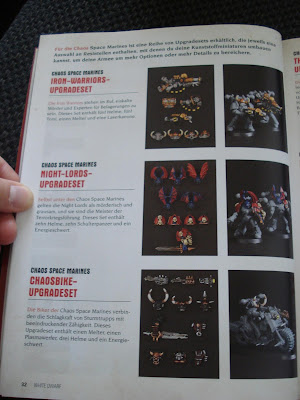