Home » Daemons of Chaos » Rumors » Warhammer Fantasy » Warriors of Chaos » WoC in November? What is Going On?

WoC in November? What is Going On? 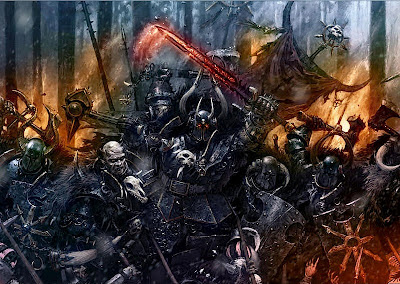 Earlier rumors had placed Warriors of Chaos as a November army book release alongside of course a couple waves of models. Now it is apparent that while the year is coming quickly to a close, the time available for releases is getting thin. So the rumors are having it that there will be no Warriors of Chaos army book in November.

via Harry on Warseer
Listen fellas ..... about the book ....... (runs for cover)
That is a little bit funny in that hastings was the first person to tell me, a couple of months ago, that the release was coming without a book.....I shot him down and said I was pretty sure it was the next book.

75hastings69 in response to what we will be seeing.

In fact I'm thinking that we will now see a WD official update for the new models....
words for the word god

there may be knights on Juggernaughts and marauders on steeds of slaanesh (rather than new marauder infantry)?

Daemons get more plastic beginning of next year.... along with a new book