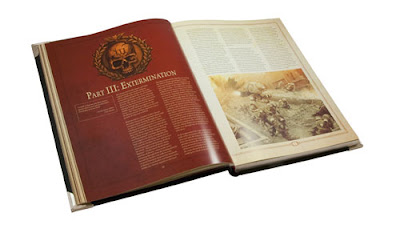 More rumors are coming in about the Primarch Models and Titans for the Horus Heresy series from Forgeworld. Many of us are just waiting to see these models, and I am sure they will be big hits. It seems there for traitor legions and their Primarchs there will be two versions released, both from when they were loyal, and one when they became traitors. More details below.

via Reecius over at Frontline Gaming
http://www.frontlinegaming.org/2012/09/18/40k-horus-heresy-rumors/
This comes to us via some of our sources.
We’ve been told that the traitor Primarch models and legions will be released in two versions: loyal and traitor.

This was further clarified to mean that for the Primarchs there will be two completely different models, one before and one after they betray the Emperor. For the other models (Infantry were specifically mentioned) they would have different shoulder pads and paint schemes. The loyal versions will be appropriately loyal looking, the traitors will be dark and angry.

We were also told that the Warlord Titan would be released near the end (the Battle of Mars was specifically mentioned) and that Forgeworld would also be releasing a full Mechanicum army to go with it! SWEET!

Furthermore, the rules for APoc will be streamlined into 6th ed 40K through HH. We were told that they would have less extra rules and be geared towards 1v1 play. These rules would allow you to play very large games without changing basic 40K much, and this does seem to fall in line with other rumors we’ve been hearing about very large games of HH.

So this sounds pretty dang amazing, awesome, and fantastic. Really excited for all of it.