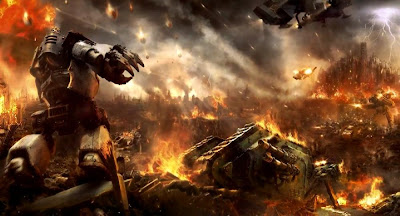 Out of Forgeworld's first book on the Horus Heresy 'Betrayal', comes your army composition for the Legions inside.


via the Feait 212 inbox (from an anonymous owner of the new book)
HQ
- legion praetor (Can take Rites of War which change how army functions, armoured spearhead, orbital assault, angels wrath or pride of the legion )
- legion centurion (50 pts basic , but can be upgraded to one of NINE different specializations: chaplain, master of signals, legion champion, invigilator, librarian, forge lord, primus medicae, siege breaker or moritat)
- legion command squad ( pretty much same , 3 man strong with able to add 2 more)


Troops
- legion tactical squad (10-20 marines, fury of the legion special rule)
- legion assault squad (10-20 marines, 1 in every 5 marines can take power weapon or hand flamer/plasma pistol)
- legion siege breaker squad (10-20 marines, boarding shields, 1 in every 5 can take a special weapon: graviton gun, lascutter etc, all have void hardened armour )
- legion tactical support squad (5-10 marines , all marines except sergeant [all 9] have flamers which can be upgraded a different special weapon.  Squad cannot be used to fill compulsory troops choices)
- legion recon squad (5-10 marines in power armour, have scout, outflank and acute senses and may have sniper rifles.  They can remove their power armour for scout armour and gain move through cover and infiltrate )
- rhino (as before but can take pintle mounted heavy bolter , heavy flamer or havoc launcher)
- Some squads only have access to rhinos, but if you take a Praetor with Orbital Assault all units that could take rhinos gain access to Drop Pods even if they previously could not.


Heavy Supports
- legion heavy support squad (5-10 strong all marines in squad (including sergeant) have a heavy bolter. All may swap out for a different weapon, but MUST all take the same kind of weapon. Heavy flamer, autocannon, missile launcher ( may be upgraded to carry flakk) multi-melta, plasma cannon, volkite culverin or lascannon. entire squad may have hardened armour)
- legion predator strike squadron (1-3 predators , includes all the forgeworld options EXCEPT twinlinked lascannon. Predator turret autocannon is now heavy 4)
- legion land raider battle squadron (1-3 landraiders any of which may be phobos or proteus, but only one of which may be an achilles)
- 0-1 legion artillery tank squadron (1-3 of a whirlwind, basilisk or medusa. ww may be upgraded to anti-air)
- legion vindicator (as before , but can take pintle mounted heavy bolter / heavy flamer or havoc launcher )
- legion spartan assault tank (25 troop carry capacity, quad lascannons may be swapped for rapier destroyers, may take frag launchers. assault vehicle, 5 hull points)
- legion caestus assault ram (a little bit modified)