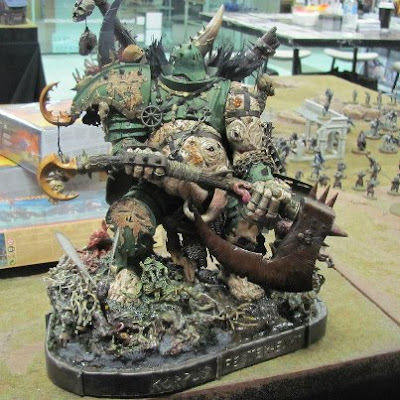 Games Day Australia apparently was a big hit. There were great seminars and it seems that Jes Goodwin stole the show for the most part. At least it was his seminar and words that have made the most rounds.


In this I have two sections, one from a reader here on Faeit 212, WHITEWOLFMXC, regarding what Jes Goodwin said in greater detail on the design of Chaos Marines. The second is from Gotthammer from his site College Titanica. Please go and check out his site for all the missing sections that I am not posting. He did an excellent write up, the link is below.

via WHITEWOLFMXC
Ok this coming from the guy who was actually in the room with Jes , heres what he really said in full ( of what i remembered and some power phrasing and summarize what was talked about) :

"There are always two spectrum's of chaos marines , this end we have the marines who today felt Naughty and put spikes on everything (who he acknowledge what he thinks renegades are) , then on the other far end we have the weird fellas whos been on the warp for 10,000 years and no one likes to play with them.

Right now the Chaos are only represented on mostly on the Renegade (spikes on everything and nth too weird)but we have a feeling that we should now try to represent the balance between the two , so chaos players can represent what they want to play , thats why you will see upcoming daemon related war machines etc etc and how the new design on the Dark vengeance box set on how the marine Armour is daemonic and including cultist , this is trying to represent both far end of the spectrum we havent really touched on , and we have now opened the door to that so we can explore more on. "

this section is by Gotthammer from Collegia Titanica and is not everything he wrote. If you want moreyou got to run over to his site to check it out.
Horus Heresy
- “Will you be making the Primarchs?”
“If you’ve read the Black Library books you’ll understand when I tell you ‘I can’t say’.”
- They want to make all the weapon options/units available they can to “stop little companies springing up in Poland”.
- The Marine armour variants were testing the waters for a HH series, which they have been working on for a year or so.
- They are working closely with Black Library to include bits of each other’s work (the Caestus appears in Fear to Tread for example). This also means they don’t mess anything up, and might even lead to BL characters appearing in mini form.
- Mechanicus? Almost certainly, but not for a while - it’s something Mark really really wants to do.
- They know it can’t be all marines all the time, and there will be xenos and non-marine forces dealt with in time.
- First book will begin at the start of the Heresy, but the lists will be designed to show off pre-Heresy forces and their fighting styles, as no divergence into chaos had happened yet.
- The Horus Heresy series is going to be ongoing, much like the Imperial Armour books, and each line will have a separate team working on it.
- The HH series is designed in such a way that people can use their existing armies as much as possible.
- Running quotes: “It’ll be like Christmas… it’ll blow your minds.”
This seminar was literally just under an hour, and it was straight into the design team one with Jes, Kevin Chin and Jeremy Vetock.


Design Seminar
- Jes loves plastic. LOVES it. If he could he’d do everything in it as for a sculptor it’s far better with almost no distortion or deformation. He foresees a future with only special characters being finecast, and generic characters all being single frame plastics like the recent Warhammer releases and the limited Dark Vengeance Chaplain.
- They want to continue putting every unit option on a frame where possible. And lots of head options.
- They’re aiming to expand the digital aspect of the company. Jeremy got very excited about the prospect, but no specifics.
- Don't call the background "fluff" around Jes. One guy did and he corrected him, pointing out that it was Jeremy's job to create that, and calling it fluff devalued it. The questioner corrected himself by saying "the expanded universe background setting", which pleased Jes no end.
- A young lad asked the following “How come Tau and Space Marines are ‘battle brothers’?” and got a huge cheer and round of applause from the audience. The reply was that yes, Tau and Marines often murdered each other on sight, but there were enough times when they didn’t to justify it. The allies matrix is there as a guide, not a proscription.
- "Why did they swap Marine chapter symbols from right to left shoulder?"
"I don't remember."
One of the attendees ventured that it was so (in universe), that when advancing the enemy would see the chapter symbol on a PA guy and know who's killing them, while terminators shoot one handed, so keep it on their right.
Jes thought that was a superb explaination, so he was going to accept that. He then went on a ramble about contradictory history and so on for a bit.
- If they can they would like to introduce 40k Dogs of War type units to use as allies to bring in lesser races. One of the reasons they brought allies back.
- There is a mathematical formula for points cost, based off a man (Warhammer) or a Marine (40k). This is then adjusted by feel for how the unit works within a given army or theme of the army.
- No release date/info for Sisters, but they definitely aren’t canned and will be re-done properly.
- A lot of the discussion was about the creative process and such, so not easy to describe. They were all very funny and there was a lot of laughter, so much of the discussion fall into the “you had to be there” category.