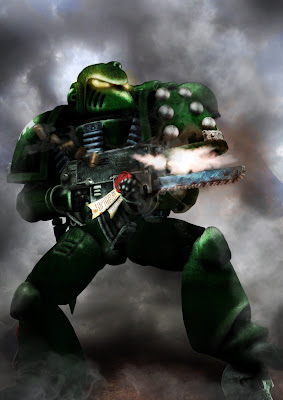 Its Monday morning here, and we have what appears as a wild rumor on a Dark Angel Siege model. I am looking forward to hearing if this one has any real place in the upcoming Dark Angels codex, or if we get anymore information on it in the near future to collaborate it.


Please remember that this is a rumor, and this one in particular needs some additional salt, even by Stickmonkey's own words.

via Stickmonkey on Warseer
Ok, debated posting this, as my sourcing is thin here. But I figured I would go ahead and pass it along, just know that this is very very tenuous, so place a large shaker of salt along side it.

The DA siege model is a DA only Techmarine with what I'm being told is a Mole Mortar. Now, those of you who have been around as long as I have (Hello RT) know the Mole Mortar was a Squat weapon that fired a tunneling shell. In my opinion and so far as i know, this really doesn't have fluff or other basis to be DA only, but then you look at some of the other new stuff, and I don't know.

From my informant...
The model is a tracked platform, similar in size to the thunder fire cannon. Techmarine rides on a platform to the side and has a harness with a single shell it is loading into the top of the mortar. The mortar is a cylinder angled into the ground, target screen off to the side where the Techmarine is manipulating it. Two additional models appear as shells bursting from the ground. One assumes they are some form of placement marker for the devices effect. Both Techmarine and mortar have DA iconography. Finecast.

Again, this is rumor, I'm just passing it along.

Also, with regard to Sammael. He is on the new release list I saw. Now he was just finecasted this summer, so he would not be on that list unless he's a new model or a new to finecast model. Well with him being release in finecast, he's not the later. So either the information was bogus to begin with, or we should have a new Sammael in one form or another in a few months time.