Home » »Unlabelled » Rumors: Everything You Have Heard is Wrong

Rumors: Everything You Have Heard is Wrong 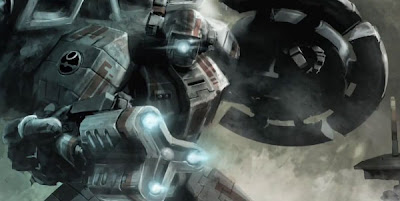 This rumor gets down to buisness quickly, to help readers look closer at how GW is changing the way models are released. It also goes in directly to discuss that Kroot are indeed in the upcoming Tau codex, and that any vehicle related to the name lamprey is not.


I think the indicator in this set, is not the above information, but where we are discussing blackout periods for rumors. I know we have definitely felt that here, as rumors are very hard to come by.

This set conflicts with the rumors that Kroot were removed from a recent iteration of a Tau playtest dex. We don't know whats in the real codex yet, as from what I understand its not yet done.

Please remember that these are rumors, please take them with a little extra salt.

via Ornithopter on Warseer
I was told, that GW is trying to invert their release order. Instead of two follow up waves after a Codex release they will release one or two smaller waves of models before every codex, one big release with the codex and some stragglers thereafter (mainly re-releases and model updates). This is widely known and not hard to deduce. But I was also told that this is only a test run for two upcoming releases and GW is fully prepared to switch back to the old modus operandi or a completely different release schedule.


GW has used the period of reduced LotR activity to produce new ranges far in advance. GW sits on a whole pile of army books/codexes and finished masters and has the flexibility to alter their release schedule seamlessly. The next two releases (Warriors of Chaos and Dark Angels) follow the old pattern, but the next two releases (Tau and Eldar) after these are deployed in the new fashion.


The Tau Codex was pushed back because of this, but only the book. The first batch of models will be released even earlier than planned (maybe even this year) – and yes, there are Kroots and no, there is no Lamprey – this whole set of rumours is 105% fake. GW has tighten their information policy for all releases around the end of the year. This includes everything not just the Hobbit stuff because one major source of info are business plans and logistics tables that are shared with subsidiaries and external companies.


Most unregulated sources sit at one of those joints. The blackout period lasts from October to February and ends there because it is not sustainable for a long time. There will be no wave of fliers this year outside of the blackout period (my source does not know if one is planned for this period or not, but if it is the info is definitely not available for regional distributors - whatever that is).


One last bit: GW has buried the plastic character stop gap and switched to multi-part finecast kits, with emphasis on “multi-part”. The sheer number of bit of these kits is on par with plastic releases. The first kit will be the re-modeled Avatar. The four Greater Demons are worked on. All of them will be larger than their predecessors and come with a lot of variety.
8/01/2012
Natfka