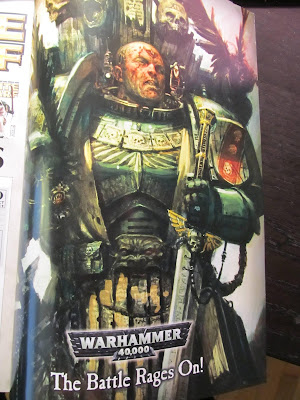 There is one question that has been in the comment sections of every post yesterday, and that is "What about the rest of September, is the Chaos Marine codex still rumored to be coming out?"

Well to answer that, I did discuss this directly with a couple different sources, and received some replies. So while trying to create a little suspense this morning without caffeine can be a little dangerous, you will have to read below to see what the answers were.


I think by now most of everyone is drooling over the starter set models. If you are not, that is OK, I'm sure there is some medical reason and you have a Doctor's note to explain it.

First off, the picture above is said to be the last page of the September White Dwarf. So there is nothing really there to say "Chaos Space Marines Codex". Although the Battle Rages On! could mean a big release still right ahead of us

A couple days ago we had a rumor from via Ravengardt here on Faeit 212. There was some a typo saying 08.08 for a chaos space marine codex release. The day he meant was September 8th. (see how I avoided all the we say dates this way stuff). So to make it short he did contact me and is his response.

via Ravengardt here on Faeit 212
Hey Natfka,
yes sorry I meant 08.09. for CSM. But I still meant release, not
announcement. I asked him when he told me about the 8th, because I
thought it's too close the starter box and he replied 8th is release.
Maybe they're in the White Dwarf anyway or GW starts to announce things
one week before release. Or he got something wrong.

Now lets get down to some red meat (sorry vegetarians, I like that phrase and red meat), I did ask one of our more regular sources to see where the codex release still stands. This is mostly because I do not want to bring forth this unbridled excitement and have any let downs. Right now the hype is so high with the starter set, I can feel it from the masses around the world.

The same source last Sunday declared the following and has said in the past that as it stands CSM and Dark Angels are planned releases before years end.

The 25th is the white dwarf which is all about the new starter and chaos space marines.

Unfortunately, the October white dwarf articles are all about chaos, so it looks like we'll see them next month, unfortunately.

It wouldn't be uncommon though to release articles about the product after it's released though, we've see a lot of "follow up" stuff happen in the past.


So does this mean that we are going to see a stealth release? Or is October when its expected? Personally I still think we are looking at September 8th for pre-orders, because I know whats under those blacked out sections and because Ravengardt gives similar dates. However I am not a rumor source, so I can only go on what I am given or find.

That basically means, I am working with the information that I have, but this one is very tightly under wraps. I think I have the right combination to this safe, but do I have the right safe?


Sorry for detailing it out the way did, but I felt it important to not just drop the information I have without going into some of these details. If I get more on this.... I will get it out to the readers here.
8/18/2012
Natfka
40k, 6th Edition, Chaos Space Marines, Rumors, Warhammer 40k