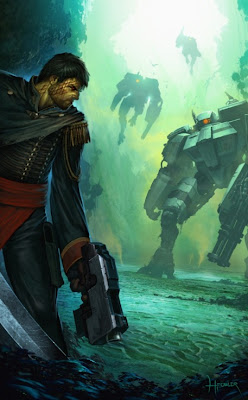 Again from the Black Library we get some new artwork, and this time its for Tau. I believe that Commissar is in for a world of hurt.

Now that summer for me is about over, its time to head on over to the Black Library and get a reading list going. If your like me, here is the link.
http://www.blacklibrary.com/

via the Black Library
Hardy Fowler’s eerie cover for ‘Fire Caste’ (due for release in 2013) shows an Imperial Guard Commissar looking distinctly battle-weary as two huge tau battlesuits approach. Hardy has really captured the menace of these tau warriors and shows just how fragile a mere human is when faced with such advanced xenos technology.
8/23/2012
Natfka
Black Library