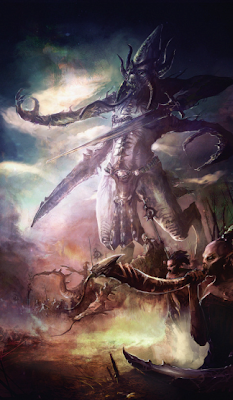 I believe I get asked several times a day whether or not Chaos Marines are going to be released in September, and the answer is that I can't be 100%.  So I am throwing down all the current rumors as I see them, between Warseer and here on Faeit 212, so that possibly we might decipher what will lies ahead.

No matter what happens though, with only 3 release months left in the year, these last few months are looking like a very tight release schedule. (I don't count December for codex releases, but I am sure we will see something that month).

Please remember that these are rumors, and salt is required.

On Warseer
According to 75Hastings69 on Warseer, Chaos Space Marines are next, but will be followed by Warriors of Chaos, Dark Angels, and then a dual release of Daemons of Chaos or Chaos Daemons. At least that is my take on it. However I could be incorrect, and I have posted up the relevant information below.

Hastings seems to correct the information by Harry by throwing Dark Angels behind Warriors of Chaos. In another post though, Harry seems to believe that the Chaos Daemons and Daemons of Chaos codices could still possibly come this year and does not have Dark Angels in his lists.

via 75Hastings69 on Warseer
By feb next year you'll have CSM, WoC, DA, DoC, CD (chaos daemons 40k codex before anyone starts with chaos dwarf crap!).

WoC are next after CSM..... not been making myself clear enought for the last 12 months obviously

Faeit 212 Sources
From the relevant sources I have had, which only tend to discuss 40k, both codices Chaos Space Marines and Dark Angels are currently scheduled for releases this year. Now if you throw in Warriors of Chaos into the mix, you would end up with something like this.....

Granted I do not get Fantasy Rumors that often, so the Warriors of Chaos is based off of Harry/ Hastings and what they have been saying now for quite some time about the codex.

One thing I find odd with the rumors above is that Daemons of Chaos and Chaos Daemons just received a White Dwarf update, and yet is predicted to be released soon with codices. I find that an odd schedule. I know the DarkGeneral had heard summer 2013 as a release date for Daemons, and that to me made more sense.