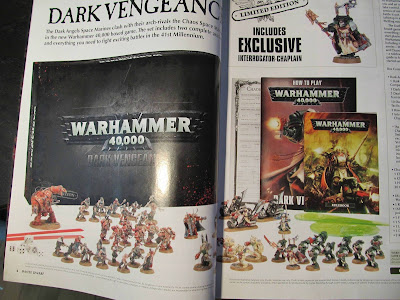 The new starter set comes with 6 missions to be played with the models in the set. The first two of which are single player missions (a big help I'm sure to get people into the game). They are listed out here, so a huge thanks goes out to Redemption on Warseer for sharing these with the public.


via RedemptionNL  on Warseer
Those forces look completely lopsided in terms of effectiveness on the table top. Glad to see GW didn't break with tradition in that regard...

There are 6 missions in the booklet enclosed with the starter set, which balance the forces a little I think:

Rampage:
Solo mission designed to be played be a single player, where the player must use the Chaos forces to wittle down the rampaging Hellbrute to a single hull point, after which the Chaos Lord must deactivate it in assault.

The Long & Winding Road:
Solo mission designed to be played be a single player, where the player must use the Ravenwing Bike squadron to survive 3 successive waves of Chaos Cultsts.

Ambush:
Small scale ambush by a handful of Dark Angels against a large force of Chaos Cultists. To represent the ambush, the Chaos player cannot declare a charge, go to ground or fire Overwatch in the first turn, and can only fire Snap Shots the first turn.

Psychic Storm:
Introduction of the Librarian. Dark Angels go against a larger force of Chaos Cultists, with staggered reinforcements such as the Deathwing and Chosen coming in on fixed turn numbers.

Firefight:
First mission to use all the models in the set, basic victory points for destroyed units, with the HQs and Hellbrute being worth more points.