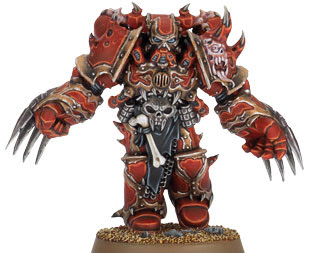 So yesterday we saw some of the pics regarding the rules from the starter set. While they were the basic rules, there was some confusion on the hellbrute and its number of base attacks, as well as what is going on with Chosen and their leadership. This set clears those issues up, and gives some more insight to the upcoming Chaos Marine Codex.

via Faeit 212 (a Must Remain Anonymous Source)
Chaos will not spend long without in-game rules for Cultists and the Hellbrute.  Both are included in the new codex.  No rules supplement is coming in the October White Dwarf.  Figure it out.

Hellbrutes are 2 attack base, +1 for each close combat weapon they take, meaning 3 with one CCW (such as the one in the DV Box) and 4 if you take two.

Chosen are all, in effect, "Champions," they don't have a Champion Champion, that would be a Chaos Lord.  Hence why it's 2 attacks base.

On the whole, Leadership has gone down here and there for Chaos Marines to represent the fact that they think for themselves and believe that running away and saving your ass is the better part of valour.

There are ways around this, through Marks and even the presence of Characters (who are Fearless and confer it in a bubble), because no one wants to piss off their Chaos Lord.

The DV box set doesn't complicate the game with points, as it pre-assigns all of the models on a per scenerio basis.

Everyone needs to calm down and consider that you "got the boxed set a few weeks early" in essence, not that the Chaos codex is "a few weeks late."

If you like the concept that Chaos Space Marines are malignant forces, tainted and changed by the warp and their dark worship hellbent on nothing but seeing the galaxy burn through whatever is their favorite means, you will be very happy with the new codex.

If you wanted evil space marines who are a tactical spear tip strike force, then you will be disappointed.

The new chaos is an evolved version of what you had before, and nothing like space marines except being WS/BS/S/T 4 in power armor.