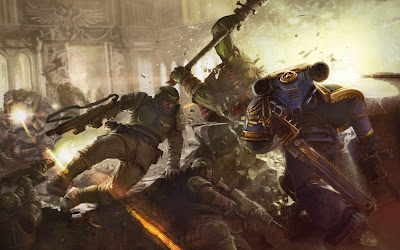 Yesterday when I woke up, there were several emails sent my way of the Games Workshop leak that listed out a large number of releases for June 2013 and beyond. In fact that list was very exciting to read through, with Sister's of Battle, Tau, and Eldar all getting releases. There was just so much in there, who couldn't help but to be excited about a possible release schedule like this.


Now that a day has gone by, there is still like always, a concern on whether or not its real. (Does this sound familiar like the 6th edition rules leak?).

While I have my own view on this, this is not an editorial piece, so today's post is on what someone else in the know has said regarding it.

Also note that he lists a codex release schedule here, which I like to the looks of very much, and it fills in one slot that I knew was missing, the one between an Tau and Eldar release.

via Harry on Warseer
The bulk of the Tau release is in production right now and is released before summer 2013.

The Tau models could be the second wave of a Tau release. Which would put them ahead of Eldar in the release schedule.

It all seems to fit in too well with what I know ... not to be right.
Someone is in so much trouble.


The release order I was expecting for 40K was:
CSM
Dark Angels
Tau
Sisters
Eldar
SM
(With 2nd waves and odds and sods thrown in)
This seems to fit with that nicely.

There is stuff in there that I have heard that I wouldn't think is very widely known.
You couldn't guess at this stuff.
If it is a hoax it is a well informed hoax.

Even so, when I broke the list down a bit, they did fall into some depressingly predictable categories.
There are just one or two things in there (which are a long way off) which seemed to fit so well with what I had heard ... that I was sold.

It is completely possible I may be getting sucked in .... and will end up looking very foolish.
I will try and find out if the **** has hit the fan or if everyone at GW is laughing their arse off