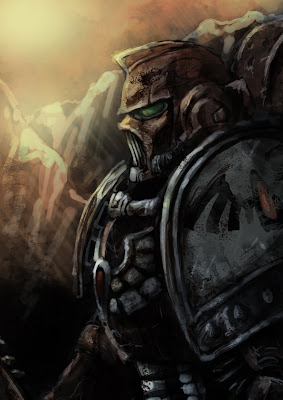 September looks to be a fun month with the release of the 6th Edition Starter Set. What we do not know, is what else is going to be released that month. Something is happening, and perhaps this will shed a little light on it.

Please remember that these are rumors, and that they come with a grain of salt.

via Ravengardt on Faeit 212
I got something which doesn't make much sense on it's own but maybe if you know more. He says everything is pretty chaotic at the moment. At the moment he can't stock some dark angels miniatures, especially death wing stuff. But here is the weird thing: he can't stock space marine tactical squads. Our local gw has one left, didn't get any and can't order more. Our gw isn't small we have usually about 6-8 boxes of standard items. That he can't order death wing items, would make sense in the light of a new codex. Space Marine items make no sense.


He also confirmed that something was left out of the White Dwarf, he doesn't know what though. They've changed something in the White Dwarf to remove something. He told me they actually changed the cover. This would make sense I guess, because the Blood Angels cover doesn't reflect the contents or does it?
8/10/2012
Natfka
40k, 6th Edition, Rumors, Warhammer 40k