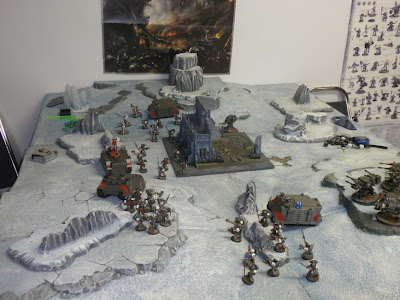 A Faeit 212 sponsored tournament is looking like more of a reality now, and I have been discussing it behind the scenes now quite a bit. With that in mind, I wanted to throw out where its at, so that the readers here can comment in an open discussion what they would like to see. Right now everything is still open for change.

Here the details thus far.....Location: Unknown yet, but in the Greater Portland Oregon Area (west side)
The tournament is looking right now towards end of March, and a final date is being worked on. It could very well be during spring break for many people.

Features
Alternating Terrain Placement: Terrain will be set up on the edge of the board or next to the table for players to place using the alternating terrain placement rules.

Allies: Of course allies will be allowed

Mysterious Objectives: Its in the rulebook, lets use it

Separate Painting Event: No soft scores for tournament champion, Painting will be its own event, with its own 1st, 2nd, and 3rd.

There will be a Sportsmanship award: it will not be a soft score for the tournament, but its own separate award.

Scoring right now is in its infancy. However this is what is being thought of.
Win: 10pts
Loss: 5pts
Draw:8pts
+secondary objectives each worth 1 pt
Finishing the Game is worth 2pts
Thats 15pts total x6 games for maximum of 90pts

First Draw will be random, second and following draws will be based on points, with the higher scored players fighting each other etc. Victory points (old school) will break ties

The thoughts are to encourage close hard hitting games. Keeping the points not far from each other, will keep every player fighting for every single point in the game. The thought is also that slow play will be watched like a hawk, and although not decided yet, multiple non-finished games could be penalized. No game that does not finish round 4 will be counted.

Problem players having a hard time with sportsmanship can and will receive pt penalties as decided by TO's, and of course in some cases could be resolved by immediate forfeits of remaining games.

The size of the tournament is currently unknown, and completely depending upon how many people and tables/ terrain we can acquire.

There of course will be prize support. Comic Collectibles has offered some prize support, and more is being worked on. So if you work at a store or own it, we are looking for sponsors for this tournament. For other sponsors that might be interested please contact me at natfka@live.com