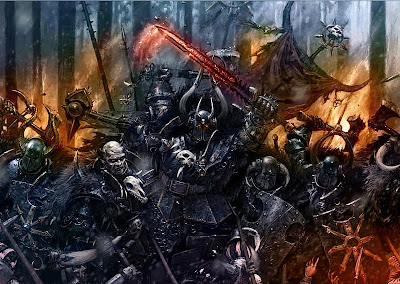 I do not hit Warhammer Fantasy enough when I see or receive rumors on them. However, 40k is not the only game in the world, and Warriors of Chaos are rumored to be coming soon. So here is what I was able to discover about this up and coming army book.


I have heard the requests for more Fantasy Rumors, so I will of course be getting to them when I can.

Release Date:
There are rumours that they will come in Q4 This year (Hastings) October (Avian, Eldargal) End October/start November (Harry) December (Darnock/Birdy, MsDarkness) Just in time for Haloween (Scoopdeta)
Some talk around the interwebz that WoC may be delayed.

Rules:
-The Storm of Chaos. They think its all over ....  (Harry)
Archaon has been redone and his story will be the backbone of the storyline for the new book. It will look at his re-emergence from the chaos waste and the gathering of another Army to march upon the Empire.
-The book will also focus more on several of the larger tribes. Not a huge focus, just some background stories.
-We will see a real Germanic feel with the book, in regards to the savage marauding tribes.
-There will also be renewed focus on the Chaos Gods and independent heroes for each one of them. People will be able to tailor their Army to run on a single God easier than before. (Birdy via Harry)
-Krom is in the book. (MsDarkness)
-Van Horstmann in as a special character can use Light and Tzeentch magic. (MsDarkness)
-Van Horstmann gets a lot of attention in the new book. (Birdy via Harry)

Models:
-Plastic chariot/warshrine. (Hastings, Harry, NatTreehouse, Scoopdeta, Darnocks Birdy)
-Chaos Warshrine- This will be the big kit for the WoC and will be similar to what was released for the -Empire in regards to their altar. It will be a large kit that has options for each of the Chaos Gods. The sculpt will be on the same base size at the war altar. (Birdy via Harry)
-New Monsterous cavalry unit. (Harry, Birdy via Harry) Not sure if this is the Dragon Ogres or something else on top of or instead of the dragon ogres.
-Don’t be surprised if there is a few monsterous cavalry options. (TheDarkGeneral)
-Monsterous options for chariot steeds and warshrine.(Valdaraukar)
-Plastic Dragon Ogres. (Hastings, NatTreeHouse, Harry)
-New poseable Dragon Ogres similar to the Minotaur sprues!!! YES!!!! Finally options for Xtra Weapons or Great Weapons and larger models that represent what a Dragon Ogre size wise should look like! And lil' bitz for "marked" units!!!(TheDarkGeneral).
-On Bigger bases than current Dragon Ogres. (Birdy via Harry)
-I vagually rememeber a description I was given of the Dragon Ogres a long time ago. It sounded like the bodies were a lot more solid and stocky more rhino that dragon ... The description reminded me of a zoat more centaur like with the ogre part of the body very upright and at right angles to the back of the lower body ... quite different from the current models. Also wearing armour that made them look much more part of the Warriors of Chaos army. (Harry)
-I've heard that the plastic dragon ogres are very old ones that were declined from the previous release but that they've been reworked a little. I've also heard that from the play test rules there is (currently) an option to mount a chaos knight on them! I've also heard some plastic chaos ogres (which are also older sculpts) may also be getting released this time around and that they're "not very good"...(Birdy via Darnok)
-A Large plastic kit (that I'll leave as a surprise). (Hastings) (Presumably the Dragon)
-Plastic forsaken. (Hastings, NatTreehouse, Harry)
-Forsaken and chosen in one combined kit (Kyte)
-New plastic Marauders. Completely redone with several weapons choices. (Birdy via Harry)
-There are also youngbloods which will be smaller and nearly naked models with throwing knives/axes and such that burst out of the units of marauders. (Birdy via Harry)
-Chaos Dragon Kit. (Msdarkness)
-Finecast Characters (Hastings)
-Throgg Troll king. (Hastings, Darnocks Birdy) Huge and close to artwork in current book (Darnocks Birdy)
-Archaon has been remodeled and apparently is amazing, with option of being on foot or mounted.(Birdy via Harry)
-Female witch (Eldargal)
-Valkia the bloody (Eldargal)
-Egrimm Van Horstmann has been resculpted. He comes mounted on an awesome new dragon sculpt. (Birdy via Harry)
-Zoat's for Chaos (once again) is indeed a rumor that I heard along with new monstrous cav for chosen style marked knights! ... Snip ... (Zoats are always associated with wood elves) ... Snip ... in truth Chaos could take Zoats back in 3rd Edition from the Slaves to Darkness & Lost and the Damned Chaos books. (TheDarkGeneral).