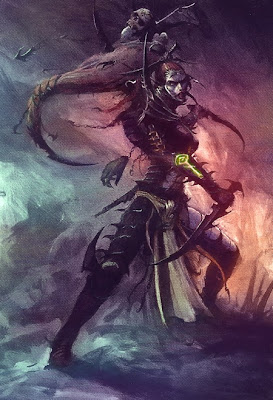 Time to get down and dirty. Those that have followed my Dark Eldar Tacticas in the past know that I do like some crazy suicidal things in my lists. (not all the time, I just find them fun). Hence my ramming raiders in 5th edition, and my overdosing Archons in 3rd.

So I am going to start off with what by far is probably the biggest and craziest do not do tactic, something I have named Wych Bombs. Is this something I will attempt in 6th edition?.... yes, and already have. (it did not get off the first time trying).

Lets get into the rules first, so I can explain why this works before letting the cat out of the bag.

Fast skimmers have changed a little in 6th edition. By this I mean they move 12" in the movement phase, and can then move flat out in the shooting phase up to 18". Add in Enhanced Aether Sails and you get some extra distance in the movement phase. (there is a rules problem with aether sails which I will get to in a few minutes).

Its important to note that in 6th edition, if you crash your fast skimmer while going flat out, you do not lose all the models embarked on your transport any more.

So lets load up our raider with wyches. 10 would work the best of you can pull this off, and if not, well, smaller numbers might do something. Next we load up our wyches with no special weapons, however we give them haywire grenades.

The next important rules section, is that open topped vehicles are considered to be assault vehicles. This means that if you disembark you can assault. Normally this is a 6" raider move, + 6" unit move + assault. However, reading the assault vehicles rules, you can charge even on a turn that the vehicle was destroyed.

Some of you know where I am going. Here are some page numbers for you.
Assault vehicle rule rule pg 33
open top vehicles pg 82
fast skimmers pg 83
embarking and disembarking pag 78
effects of damage on passengers pg 80

So you take your fast skimmer and haul it flat out into some terrain near the enemy lines, you roll a 1, which immobilizes and of course wrecks your raider. The effects of damage on passengers clearly states that you must immediately disembark in the usual manner (even if its in the shooting phase from going flat out). Now because you are an assault vehicle, your units can now assault from the wreck. hence the Wych bomb goes off.

Now many of you are thinking this will never work. I didnt say it would. The wych bomb is simply one of those crazy suicidal tactics that if one went off, say you were fielding two or three of them, you could easily assault any vehicle within reach. More than likely wrecking several of them. Razor spam is still very prevalent and this type of tactic if it ever went off, would destroy it rather quickly.

Wych Bombs are definitely one of those do not try this at home tactics.

A final note on enhanced aethersails. If you wreck on the round that you use aethersails (meaning you fail your dangerous terrain test) all the passengers in your raider are dead according to the current rules. Aethersails very plainly (and hopefully this will be updated) say that you cannot disembark from a raider that has used enhanced aethersails. Since you cannot do any disembarkation your models are all lost according the current rules if it wrecks itself on terrain.
8/31/2012
Natfka
Dark Eldar