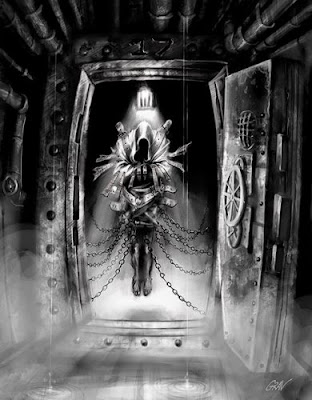 One of the issues with Dark Eldar was in scaling up for larger games. Larger games limited a Dark Eldar player, because the benefits of characters like Haemonculi were limited. Now with the FOC opening up Haemonculi are now a valuable asset, and can almost be thought of as a unit upgrade........
For the MSU Dark Eldar player wide spread Haemonculi are not really necessary, as you are spamming 5 men/transports. However, move up on the scale a little, with units of 10+ and suddenly a 50pt upgrade by adding a Haemonculi becomes a valuable asset.

Feel no pain is an extra save that you is very easy to get now for Dark Eldar from the Start of the game. A 20 man warrior squad with two splinter cannons, and a sybarite fall right at 210pts. Add a 50pt Haemonculi, and you now give that unit feel no pain. It should be said that with the re-writing of how rapid fire works, that these 20 man squads are now cheaper and provide much more firepower than a anti-infantry scourge unit. Not to mention that is much more durable.

Extra HQ slots means more Haemonculi, and any unit of 10 in your dark eldar army should be considered a prime candidate for a Haemonculi. So yes, every unit you field short of a vehicle or monstrous creature, could start with feel no pain.

Upgrades:
Still looking at your standard Dark Eldar unit of Warriors, Trueborn, or other, Haemonculi have the option to get a power weapon alongside the units character. This easily gives you 2 AP2 weapons in the unit if you go with a power ax type close combat weapon.

If a Huskblade goes to AP2 like it is rumored, Ancients should be a candidate for taking this expensive pt cost weapon because they have a higher WS, Wounds, and attacks.

Scourges, Jetbikes, and more fast moving units
Consider the idea of attaching a single upgraded Haemonculi to the unit, and then just let them round 1 take off and do their thing. This gives your fast moving reavers and scourges the additional save that they will be needing as they close with the enemy.

As normal, if you ever followed this site before and its Dark Eldar Tactics, Ancients are great for taking a casket of flensing, or anything else that requires a shooting attack or if you are dedicating yourself to close combat as they have a WS5, BS5, W3, A3 and I5.

Every other standard Haemonculi, should really look into a liquifier. I dont know too many units that would like to charge a unit with 2 or more of them in it. The great part about the liquifier, as it can be used from anywhere in the squad to create the Wall of Death rule when snapshooting at charging units. Example.......

Round 1.... Reavers leave their starting haemonculi behind as they race towards the enemy, taking the pain token with them. The lonely token-less Haemonculi, now moves forward and joins the 20 man warrior squads, bringing their wall of death liquifiers with them, so that now each squad now has two liquifiers in it.

Do not forget, that haemonculi can still only take one of any items that is marked so per army. So do not forget your shattershard or Dark Gate (now str 10 on the whole lg blast template)

The primary changes to Haemonculi, are that they now can be very wide spread throughout your army for a decent price. Technically speaking you can field 12 of them, although I believe that you start to lose efficiency very quickly after the first one.