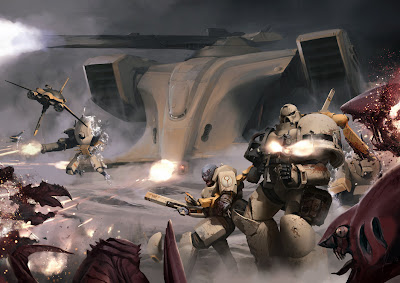 The way this is looking, we will have very little time to adjust to codices in the near future, as the release schedules look very busy for the next 8+ months. Exciting times are ahead.


In this one Hastings lays out the release schedule for many months to come. He is a very credible rumor source, so lets get down to all the details.

via 75Hastings69 on Warseer
Tau are the first 40k release of next year (after the Deamons which release for both at the same time) and before Eldar.

Dark Angels are, after CSM and before Chaos Daemons (Last codex of 2012)


I believe CSM will be in the WD after the starter box issue and release end sep/begin oct. then same pattern for WoC, DA & Hobbit. Does seem a lot to cram in before the end of the year but I'm reliably informed this is what's happening........of course I could be wrong.

No SoB for a long time yet

That little lot should take us to around this time next year or a couple of months after (plus waves of models in between the codex/army book releases.... oh and the hobbit stuff).


So this is What 2012 should look like.........
Chaos Space Marines: End of September
Warriors of Chaos: End of October
Dark Angels: End of November
Hobbit: Beginning of December
Chaos Daemons: last codex of the year? End of December?
Tau: First Codex of 2013

The first part of this looks similar to what I have heard for White Dwarf. White Dwarf for October is full of Chaos Marines. So with my sources and Hastings (which is very reliable, I have to go with this set. In essence everything seems to line up)

via Faeit 212( A Must Remain Anonymous Source)
October white dwarf articles are all about chaos
Chaos Marines and Dark Angels before years end.