Presence of Faeit: Starter Set, Dark Eldar, and Guardians of the Covenant 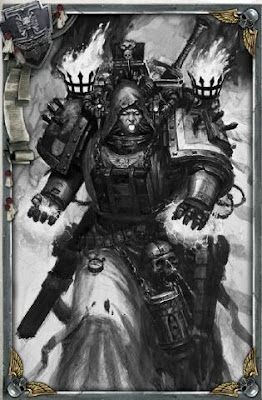 That was one hell of a week. There was all the White Dwarf leaks showing off Dark Vengeance and its models. That alone made for an excellent week.


Starter Set
While I am excited for this codex, I am on the Dark Angels side of things when it comes to my side of the starter set split. Of course this means I might jut have to pick up an extra starter set for the chaos side of things. I really do hope that distribution is settled with this release, because its going to sell a ton of sets.

The Dark Angels Chaplin is a very cool model, but at the moment, I am not counting on being able to get one, unless independents around here are able to acquire a couple copies of it. Ideally two copies of the limited edition, but will settle for two standard sets.

Regardless, beautiful models. For a starter set these models are nothing short of amazing. When new chaos models start arriving from the codex, its going to be scary. I am all hyped up about what these models will bring.

Lets really look at this starter set for a second. We do not have a set price for this thing, but assuming its comparable to before (and slightly more), its an amazing deal. In fact a huge value. There are two friends of mine that really want to get into 40k, and this IS the box set that will do it. It might take a swift kick in the butt to get them to move forward, but there really is no better deal with no better two armies to do it with.

Dark Eldar
To MSU or Not to MSU. To be honest, I am falling in the middle of that and on both sides. I am hoping that this week I am able to get in a couple of games with Dark Eldar to really set my path in front of me, because I keep bouncing all over the place with it. Consistent things in my lists of late......

2-4 20 man warrior units. Most often only 2.
6 heavy support choices (4 ravagers and 2 Voidravens proxied atm)
as many Trueborn squads as will fit at 86pts apiece. 3 man squads with 2 lances each.

The rest has been highly fluctuating with many different ideas. I am going to drop one of those here for you dark eldar fans......

Ally with Grey Knights and bring Coteaz with two basic warrior acolyte units. 112 total pts of Grey Knights, and you get to re-roll Vects seize the initiative roll of 4+. yes, they do not ally well, but you are trying to hit the enemy first, and get a seize. Basically its a go first tax, and the army is built to deploy second, and then jump the enemy hard on a seize. 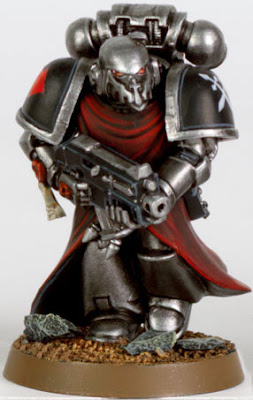 Guardians of the Covenant


The Guardians of the Covenant is a Loyalist Space Marine Chapter and a Successor Chapter of the Dark Angels of an unknown Founding, thus making them one of the Chapters that comprise the Unforgiven.

So I have found my Dark Angels Chapter. Why? for a couple reasons.... My Grey Knight Vehicles can easily transfer over when I need them for one. The other is the flexibility of using blood angels (custom chapter) as allies for my Imperial Guard. Guardians of the Covenant are Grey with black and red. So yes, the colour scheme played a huge role in what I wanted out of my starter set.

However, once getting into them and their background, I like what I read. So we have a winner. Also is an army I can customize quite a bit and enjoy.

The Guardians of the Covenant are as dedicated to the scholarly arts as to the ways of war. Masters of both, the Battle-Brothers of this Chapter use their keen intellects as a weapon as sharp as their Chainswords. The Chapter's Astartes study the teachings of the Emperor and of their Primarch Lion El'Jonson in minute detail, attaining a unique perspective on the object of their diligent studies. Every shred of ancient wisdom is absorbed, debated and analysed, so that no ruse or stratagem is beyond the Guardians of the Covenant, and none may better them on the field of battle.

The Chapter uses graphic imagery that is distinctly gothic in nature. The Guardians of the Covenant decorate their vehicles with text and images copied from illuminated manuscripts sacred to the Astartes that they have produced themselves in their scriptoriums on Mortikah VII, such as the Codex Astartes and the Requiem Angelis.