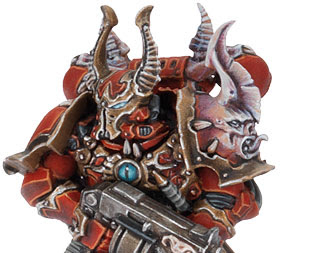 The Crimson Slaughter is a Renegade warband of Chaos Space Marines dedicated to the service of the Blood God Khorne. Originally they were a Loyalist Space Marine Chapter of an unknown Founding known as the Crimson Sabres, but they eventually slid into heresy and damnation during the 41st Millennium.

Warband History
Once known as the Crimson Sabres, a Loyalist Space Marine Chapter, the Crimson Slaughter began their descent into heresy on the world of Umidia in the 41st Millennium. The planet's inhabitants were, according to the Crimson Sabres, attempting to summon a powerful daemon of the Blood God Khorne. In their rush to judgment, the Crimson Sabres purged the entire planet of life. This led to them being declared Renegades by the Inquisition and the High Lords of Terra due to signs of continued psychological instability and over-zealous prosecution of their campaigns.

As punishment (or possibly reward) for the bloody annihilation of his worshipers, Khorne cursed the Crimson Sabres to be haunted by the voices of those they had slain. Subsequent bloodshed could silence the voices, but only for a short time. Sevastus Kranon, the Chapter Master of the Crimson Sabres, led his warriors into the Eye of Terror to slaughter Traitors instead of spilling the blood of innocents, thereby gaining a temporary respite. Within the Eye of Terror, the Crimson Sabres were finally fully corrupted by Chaos and were remade as the Crimson Slaughter. They were blessed with many gifts to enhance their combat prowess. Sevastus Kranon, reborn as the Chaos Lord Kranon the Relentless, learned of the mystical Chaotic artefact known as the Hellfire Stone and led his warriors in search of it. The Hellfire Stone was a powerful Chaos artefact which, once anointed with the blood of a Loyalist Space Marine, would open a gateway to the Warp and allow a powerful Daemon of Khorne to enter realspace from the Warp. The Crimson Slaughter were also accompanied by the fearsome Helbrute, Mortis Metalikus, who had once been Sevarion Kranon, the actual biological brother of Sevastus. After refusing to give in to the blood frenzy that claimed his Chapter, he was imprisoned by his brother and driven mad before finally being entombed within the metal sarcophagus of a Helbrute.

Joining forces with a more powerful Traitor Legion in the midst of a Black Crusade, the Crimson Slaughter rampaged across the southern rim of the galaxy. When the world of Stern’s Remembrance came under attack by the Forces of Chaos, it drew the attention of the the 5th Company of the Dark Angels. The 5th Company's Grand Master Zadakiel lead a squad of the Chapter’s deadliest warriors, the Terminators of the Deathwing, to purge the Traitors and their dark master. But a greater plan was in action, and it fell to the Deathwing's Sergeant Balthasar to defend his commander from the machinations of the Ruinous Powers. Unfortunately, many valiant Loyalist Astartes were killed, including their commander Zadakiel. This earned the Crimson Slaughter the undying enmity and wrath of the Dark Angels.

The newly-ascended 5th Company Grand Master Balthasar vowed to hunt down the Renegades and bring their heads back to the Rock, the spaceborne Fortress-Monastery of the Dark Angels. The 5th Company was also accompanied in this task by members of the elite 1st Company, the Deathwing, members of the 2nd Company, the Ravenwing, and a Librarian by the name of Turmiel. The hunt for these Renegade Space Marines took place across a dozen worlds, until the Crimson Slaughter were finally tracked to the world of Bane's Landing where they were confronted by the Dark Angels 5th Company once again. Kranon the Relentless, the evil lord of the Crimson Slaughter, sought to use the Hellfire Stone to summon forth his daemonic masters and usher in an age of darkness. As the Dark Angels raced to stop him, a mighty conflict between the loyal Balthasar and the Traitor Kranon was in the offing.
8/30/2012
Natfka
40k, 6th Edition, Chaos Space Marines, Warhammer 40k