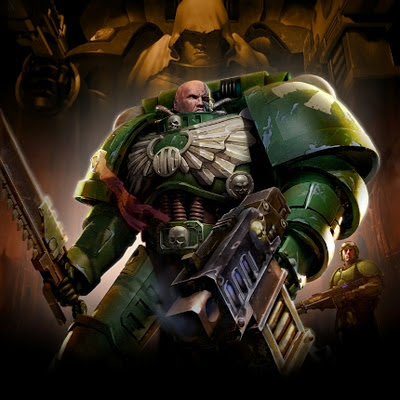 The Dark Angel "Tempest" is a new speeder that can "zoom" with dual twin-linked assault cannons and a typhoon launcher. Not only that, but Asmodai is back, and a lot more.......


Yesterday we had a set of rumors that were translated from Italian. While some of it was hard to read because of the translation, we were gifted with the corrections to these rumors. According to our source, some of it was wrong, off, or even backwards. So take a look,

... The DA codex will have a new choice in bipode heavy media mortis to be appointed and will have two guns.
It's just the Dreadnought.  DA Dreadnoughts can purchase an offhand autocannon or missile launcher as normal, upgrade their primary gun as normal, or replace both arms with a pair of matching guns to be deemed "Mortis."

there will be a new character that ought to choose allies from other codex (called guard?) as a troop choice ...
This is backwards, one character prevents you from taking allies from Guard.

about the Deathwing I heard something about a box containing two hammers and shield and weapon type weapon nemesis that should give FNP to 2 +
The apothecary is FNP 5+ like normal, only one unit per army, there is a similar-to-warding staff option but not as good and for librarians as it uses a warp charge but is an automatic psychic power that can be shut down only by runic weapons and the like.

there will be new variants of land speeder ... (And perhaps also one that makes the functions of the storm talon)
Correct, the Tempest basically.  It's can Zoom, comes with a twin-linked assault cannon (not on a turret) and typhoon launcher.

the "Blazing Sword" is something that has to do with the ravenwing ....
No idea what he's talking about.

The presence of 3 banners that will characterize the army and the command team.
Replacement for the distributed per-squad banners.  These are a lot like the SM special characters, they grant a USR for the whole army when purchased and are very expensive, must be modeled (but come as raised image banners in the DA character box) and still apply even if the banner is lost.  It's just a visual representation of a way to place points.

Note: This is also the current direction for the next SM release, where Combat Tactics is renamed Chapter Tactics and is replaced by paying a surcharge on your HQ, instead of having to buy specific characters.
Named characters still impose their Chapter Tactics as per normal, and are cheaper than a standard HQ + ChapterTax, but it's a nice alternative.

the DA will have different rules on the use of plasma weapons .. something warming ... to represent the fact that they are experts in using these weapons.
They can reroll failed armor saves against Gets Hot! and vehicles get to reroll its 4+ to avoid the hull point.

New aircraft is introduced into the codex DA will not be the storm Talon.
That would be the tempest from above

the cyclone missile launcher will have an AA if the model remains stationary for that turn.
Close but no cigar.  Remaining stationary lets you reroll misses with Cyclone launchers against flyers.

There will be new options for the predator.
Plasma Destroyer Turret, heavy 3 plasma cannon, no plasma cannon sponsons.

WW AA will have the option as an upgrade and 3 different types of missile to choose before the game.
Replace both Castellan and Vengeance with Helios Missile launcher for free.  Heavy 1, Twin Linked, Skyfire Interceptor.

special character chaplain will be introduced
He's not new, it's Asmodai.  He's just making a come back.

there will be new psychic powers and will be given space to a couple of new units that are not present in the previous codex.
The first part is true, they get a new Lore with only some resemblance to the current codex.  There are 2 new units (outside of the additions of Vanguard and Sternguard).

There are two basic troops choices and not just one.
Tactical Squad and Deathwing are troops.

it comes to AA missile launchers in the new codex .. I do not know, and this refers to the type of the missile destroyers or to those mentioned above.
Devastators can upgrade to take flakk missiles at +5 points per model, replaces Krak and Frag options.