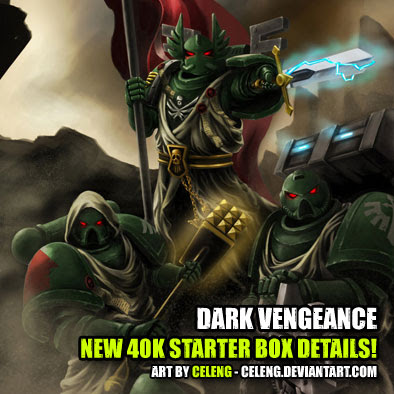 The 6th Edition Starter Set details is making its rounds now. It looks like it is very close to the chinese (I think it was chinese) leak we had some weeks ago, but I have not double checked the details. The new Chaos Dreadnought type unit is a "Hellbrute".  Enough of me talking about it, here is the new Starter Set for 6th edition...... Dark Vengence!


via beerogre at Beasts of War
Chaos Cultists are in!

That’s right all you Chaos players… I refused point blank to believe that GW would ever release Chaos Cultist, but they have. The Dark Vengeance boxed set (did I not mention the name previously?) will have 2 units of 10 Chaos Cultist models, one armed with auto-guns (with a shotgun & CC weapon for the leader and a Heavy Stubber support trooper) and one with auto-pistol & CC weapon (with 2 CC weapons for the leader and a Flamer support model).

The Chaos Cultist look like everything you’ve ever wanted for Chaos. They’re bound in rags, with metal half-masks and weapons that suit the cobbled-together, improvised look that you expect from the dregs of Chaos.

But that’s not all for those naughty Chaos worshippers; they’re getting a unit of 6 Chosen…elite Chaos Space Marines, armed with a variety of Power Weapons (a Maul on the Sergeant, a Power Fist, a Chain Axe and a set of Lightning Claws by the look of things). The remaining Chosen are armed with Boltguns, but this bodes well for the potential that these exemplars of Chaos might get some more customisable options in the upcoming new Chaos Marines codex.

To lead your forces, you have the obligatory Chaos Lord, armed with a Power Sword & Plasma Pistol. His pose is a bit static, but that is only in comparison to the much more animated Chosen.

Lastly… what would Chaos be without something big and menacing to bring to the table? Well… how about a brand new model… the Hellbrute!

The massive Hellbrute model comes equipped with a Multi-Melta & Power Fist. Suggesting that this isn’t a Dreadnought replacement, but is in fact a huge suit of specialist armour crewed by a Chaos Marine (or more likely a Champion). Actually, the model resembles a huge suit of Terminator Armour with lots of cool Chaos gribbly bits… I’m hoping for a Monstrous Creature that acts like the Dreadknight… what about all you Chaos fans? What would you like it to be?

But what about the Dark Angels?

They haven’t been left wanting and with a new codex (no doubt in their future) there is quite a bit to have a look at.

Firstly, they wouldn’t be Space Marines without the obligatory 10 man Tactical Squad. However, the Dark Angel Tactical-Squad has a twist… it’s got Plasma!

The ordinary Space Marine grunts come sporting a Boltgun, but the squad also has a Plasma Gunner and a Heavy Plasma Cannon model giving support… and just to round out the theme… a Plasma Pistol/Chainsword Sergeant.

The Tactical Squad also has a mixture of poses, this time around. Some of the Bolter-totting Marines are holding their ubiquitous weapon at jaunty angles to make the squad look a bit more animated… and it works too… good job GW!

The Marine side wouldn’t be Space Marines without a smattering of Terminators… so you get a squad of 5 of them. It’s a pretty standard squad, with Stormbolter/Power Fist, with a Power Sword Sergeant. However, you do get an Assault Cannon and Chainfist option… and true to previous form… the models now come in a variety of more dynamic poses with the squad sergeant even sporting Wings but thankfully no nipple armour!

The last squad in the box is a unit of 3 Space Marine (or Ravenwing) Bikers, with Sergeant and one Biker sporting Bolt Pistol/Chainsword and the third Biker packing a Plasma Gun. The models look similar to previous Ravenwing Bikers (with that big wing banner on the back) and are probably the least inspiring out of the box.

But let’s not end on a low… let’s talk about the Dark Angel Triple Whammy… 3 Heroes!

The box will contain a Dark Angels Company Master (Balthasar)… resplendent with his erect Power Sword!

A Dark Angels Librarian… with a slightly less impressive looking Force Sword… and a limited edition Interrogator Chaplain, who’s Power Armour (including smoking exhaust details) and embellished robe might be the most ostentatious model in the box!

That’s all the models in the box… but what about the Rulebook?

I know many of you have been planning to buy the box (price TBC) in order to get your hands on the smaller rulebook. So rest easy… there will be one in the box.

There will also be templates and a new How to Play Dark Vengeance booklet, that allows you to jump right into the action.
8/08/2012
Natfka
40k, 6th Edition, News Headlines, Rumors, Warhammer 40k