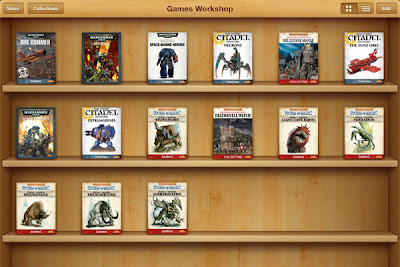 The new digital products are not yet something I personally get to take advantage of, however, they are something I watch closely since I am very excited about GW going digital and what can happen in the future with this.


There are a number of updates on this, and I have included the original rumor as well as the update. Please remember that this is a rumor.

via Stickmonkey on Warseer from a couple days ago
Had a conversation with my source about the digital releases. Apparently, I was confused on the release schedules. Digital releases will NOT coincide with a model or physical book release weekend to spread out the offerings. I was originally told first weekend of the month, and this was true for July. However it's apparently the first weekend without a model release. This means there could be something nearly every week coming out.

If true, all my release dates above would slip a week from what I stated.

September releases:
6th Ed 40k digital rulebook (will go up same weekend as starter set released)
How to Paint (I am not certain but this may be the same as the flip book that was released earlier this year with the paint set.)
And a few more WFB


Note: Dark Angels was not in the info I saw for the remainder of the year...