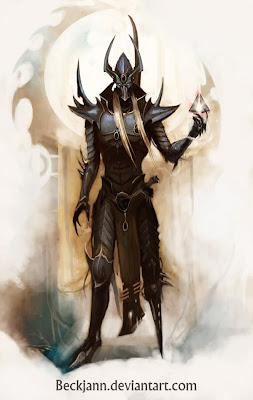 6th edition is a complex game when it comes to building an army list at 2000+ pts. (which is where I play a lot now). I love it though, and building an army list that is balanced gets extremely hard at this level. Not because a balanced list is hard to take, but because of all the varied lists you could face with double foc and allies. Its one of those things that is making the game very exciting to play.


Kabalite Warriors have gotten a nice bump in power in 6th edition. Not because they are much different, but because of the rapid fire rules. Now this would be an even bump with other armies, were it not for feel no pain being able to be spread across your armies much easier (you can take more hq selections).

So here is how I have been fielding my Warriors.
-Kabalite Wariors (20). 2x Splinter Cannons, 1x Blaster. Sybarite upgrade with a close combat weapon and power axe.  This drops at 235pts

-Then lets add in the Haemonculi, with a liquifier (for counter assault) and a power axe. This is for feel no pain, an ap2 wpn, and comes in at 70pts

-For my forward two 20 man squads I add in an Archon to each. Blaster, Djin Blade, Haywire, and shadow field. Comes in at 130pts. Note that my current lists also have combat drugs, but that's for another reason which I will not get into here yet.


Two units dressed like this can put down an awesome amount of firepower. within 18" I believe its 42 poisoned shots on the move. This rivals scourges now with their massive ability to drop tons of anti infantry firepower.

There are some interesting things, some of what I have not tried yet, so they are here for you to take a look at.

Add in Asdrubael Vect to a unit like this, and they become fearless, with preferred enemy. So yes, you hit on a 3+ and re-roll 1's. Then you wound on a 4+ with splinter weapons, and re-roll 1's.
Now go crazy and in Duke Silscus and you wound on a 3+ and still get to re-roll those 1's.
I'm not trying to make this a deathstar, but wow, you can get some great shooting in, so looking at the options is very worth your time.

Lets talk Dark Lances..... Get them elsewhere. Even in 20 man units, there is no real reason to take dark lances over splinter cannons. You can argue this one to death, but dark lances are best coming out of either scourge units or trueborns. (i prefer trueborns).

I love these 20 man units, because the best way to really take them down is through assault. That is right where you want your archon to be, and this is where I put him. Advancing in a 20 man warrior unit on enemy positions. If someone wants to gun you down by rapid fire, that's great, because that's this units specialty.

Smaller units.
10 man infantry units are mostly a cheap mans units when points are tight or in small games. They do not work the same as the 20 man unit, and should be considered to be support units, rather than a vanguard unless your game is really small. Still get your lances elsewhere and take a splinter cannon.

If you are using a raider force, 10 man units work well in raiders, grab yourself a blaster, splinter cannon and do not forget to upgrade to a sybarite. You will need the leadership to avoid getting pinned. I do not like adding splinter racks to raider this way but that is a matter of preference. I have not tried this tactic in mass.

5 man MSU warrior squads. I am still a fan of the 5 man warrior squad. Blaster in hand with a sybarite with a blast pistol. Throw them in a transport and hope they survive the fire. With a couple larger squads I like multiple small units. They go down quickly, but they carry just enough punch to take down that flanking Marine bike squad, or that hit those paladins with a couple S8 AP2 guns to do some damage.

They can be used to help pick off hq or other selective targets. They are fast enough and mobile enough to get where you need to place those shots. Just be careful of where you place that expensive sybarite, or just consider him a casualty.


That is it for now. I have to get in more games with warriors, but I believe in 6th edition they can be a mainstay of your army, with greater access to feel no pain, and greater shot potential with the new rapid fire rules. Large units are meant to gun down any enemy unit that is not inside a transport, while small MSU units are there to take down selective targets, assuming of course that they make it.