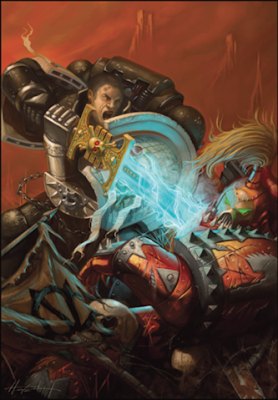 Normally this time of the month is rather slow for rumors, but it seems they are still coming on strong. This week was busy with rumors of the 6th edition starter set, Chaos Marine rumors, and now..... "the release of the Dark Vengeance Starter set and Chaos Space Marine codex". May the Emperor Save Us.


Starter Set and Chaos Marine Codex
Its not normal that I have to add on to my Sunday editorial after its completed and set to post, but with the latest information on the starter set and the marine codex being set to be released only a few weeks out I had to do some moving around. Its so funny how quickly an article can be outdated.

So the starter set in just a few weeks is nothing short of amazing. I want them, and in fact will be getting two. What is even more exciting is that the Chaos Marine codex is simply a short week or so afterwards. When this actually hits, a lot of us will be wandering around with shell shock (I already am).

Chaos Space Marine Rumors:
The QnA session last month here for the Chaos Space Marine codex was a lot of fun. So you can bet I was looking hard to see where TastyTaste's rumors led us, and what the differences were. There was some differences to be seen on point costs, so I thought I would share a little insight.

Our mystery guest said this during out QnA session.


I'm only answering questions that have answers in the pre-print copy, because a ton more people had access to that then the post-print and I'd like to avoid censure

So really a few minor points are not much in the way of last minute changes or adjustments to show any real difference between TastyTaste's rumor drop and the set we had. Also I do not moderate TastyTaste's rumors, but I do consider him pretty reliable, but I am not going to go into any specifics on why, so don't ask. This is just my editorial on laying out what I know, between two reliable rumor sets and comparisons.

The two though do seem to correlate quite well with each other.

The Hobbit
I know many of you saw a post that was removed and a lot of people were asking why. So here it is.

In the past I have done work for Hollywood movie industry related companies, where information was known about upcoming releases. They are extremely hard core on and almost violently vocal about leaks and other information. When I was involved, frivolous lawsuits were thrown everywhere and anywhere they felt like, just to keep the information down. They did not care if they were real lawsuits or not, but they were effective at getting the information down. So I will not be doing Hobbit rumors. I will however, probably still cover any news or information as it is released.

Games Workshop did not say anything to me regarding this. In fact, every conversation from Games Workshop regarding the site has been positive. Yes I know many people think otherwise of Games Workshop, but every experience I have had with them has been good, both from a customer standpoint and otherwise. So no, GW did not contact me about the Hobbit information.

New Line Cinema on the other hand. Well enough said.

Warhammer 40k 5.5
One of the things I find amusing with players and Tournament organizers is the selection of rules they are choosing. Even though I am focused on playing the game as it is written, and not some fluffy retro wanna be 5.5 set of rules (yes, that is what I am calling those tournaments now... Warhammer 5.5), I am discouraged on how they are doing it.

If you are going to get rid of some of the rules, lets at least make it balanced for all codices. If you are going to get rid of anything, lets get rid of it all, or you are literally screwing over certain types of armies. Get rid of allies, fortifications, double foc, and flyers. Keeping one of these and not the others is a little bit ridiculous, and you are hurting the hobby, not helping it. Certain armies, like Tyranids, Dark Eldar, Eldar, Tau, Space Wolves, and more, are not equipped at this point in time to just cherry pick which rules you like. So get rid of all of it, and play the very basic noob version of 40k.

(In a soft pampering voice) Its OK, really it is. If this makes you mad, I'm sort of sorry, take a deep breath and lets move on. Its nothing personal....... Mike.

(I'm joking and this is not directed at some Mike guy, I just have a very dry sense of humor). This is still a weekly editorial, so lets not get all flamed and personal in the comment section, these are just my thoughts on the subject.

Leaked Model Releases
I would really like to see this thing as being real, there was just so many things that looked wonderful for the future. Expansions for armies, and from the looks of it, possible mini-dexes (harlequin stuff in there). Even a single Dark Eldar unit and some Imperial Guard have me ready to spend some money the second pre-orders come up.

If for some reason this is not real, I do hope that Games Workshop, at least someone there, reads about all of its customers willing and wanting to drop all their money on what they saw in on that leaked release schedule.

These kind of fast paced release schedules really are what people want to see. Its the kind of thing that will bring new people into the game, and bring about the hype this game so deserves.

Dark Eldar
Yes, I am still working on this army. I struggled with MSU dark eldar in 5th, and I think in 6th it also is something I do not like. However, scaling up into the 2000+ I am really liking how my dark eldar are starting to feel. I was hoping to get a battle report in with my dark eldar, however the game was cancelled with schedule conflicts. So Dark Eldar are my next choice in regards to getting something done and posted.