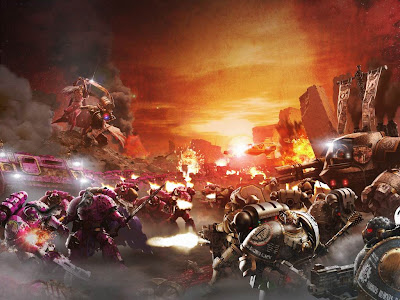 
Here is a new set of rumors regarding book 1. Enjoy

via Faeit 212 (a Must Remain Anonymous Source)
The Horus Heresy book 1 will have rules for playing Space Marine Legions.

Each legion gets a unique special rule for all space marines.

Each Legion is getting a unique elites option.

HQs get some unique wargear based on legion as well.

They can't blob, but they can be taken in squads up to 30 anyways.

Super heavy tanks are in, but are BS4 with space marine crew.

Legions have the option of taking allies from other space marine forces, Titans or guard air force.

Primarchs are Apocalypse only and pretty baller.

No rules for Horus until the Battle for Terra book.

Mortarion, angrin and fulgrim are in.

Space marines are fearless and a basic marine is 16 pts with bolter, bp, ccw and their legion rule or generic place holder.

Games are recommended to be played at 2,500 points or more.

One of the special scenarios calls for 10,000 points per side and ISN'T apocalypse.

There is a section on Xenos which suggests that some heresy era rules may come for them as well, but in betrayal they are a foot note but can still participate in Volume 1 of the campaign (and presumably throughout).

later in the series to keep it fresh, there will be additional wargear and options for traitor legions in the form of mutations and gifts as well as a rules for using daemons as allies, and similar ally intended lists for sisters of silence and Custodes though nothing will stop you from using these lists as pure armies save that they are not fully fleshed out.


You just nominate your legion, you don't have to purchase a specific special character.

Don't worry though, special characters are in, and they force your legion rule.