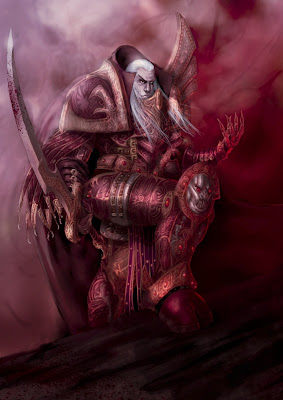 The Horus Heresy's first book is coming soon, and its Gamesday UK 2012 for the first book's release date. The first book will be a huge hit, and I am hoping we see a series of books that will lead right up onto the Emperors Doorstep.

Compiled by Bigred on Warseer. Rumors are compiled from Harry and Roguestar on Warseer.
Basics
Three books planned - SO FAR. Could be others.Primarchs and rules for the legions will be covered.Volume 1 - "BETRAYAL"Covers the opening of the Heresy, the Dropsite Massacre, the Traitor Legions, space combat in Istvaan, and Primarch models for Angron, Mortarion and Fulgrim.

Angron's miniature is described as: