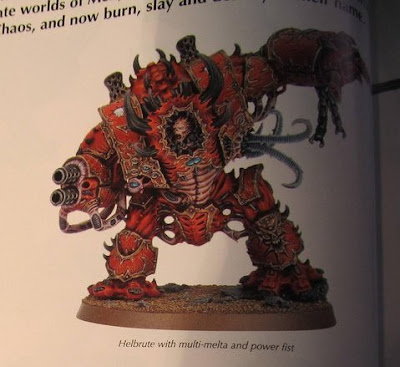 The question of this new model from the starter set is finally answered. Its a walker with options for a butcher-cannon or twin reaper auto cannons..... wow. Thats a lot of firepower. Lets take a closer look!

The source for this sent in a correction on the stats. Basically oops sorry it is 12/12/10. I have corrected it below.

via Faeit 212 (a Must Remain Anonymous Source)
There's a rumor floating around that the hellbrute strikes at initiative 1.

I just want to clarify that while it is listed as having a Power Fist and not a Dreadnought Close Combat Weapon, because it is a Walker it does not suffer from the Unwieldy special rule, that's why it's simplified in the codex entry.

Mark of Khorne: Rage USR
Mark of Nurgle: 5+ restore a hull point OR repair immobilized / weapon destroyed at the start of a turn.  Does not let it get back up after having been killed unlike Unholy Vigor.
Mark of Slaanesh: Sonic scream, gives it offensive/defensive grenades
Mark of Tzeench: flame weapons (if it has any) are +1 strength and -1 AP (heavy flamers are AP3... whaaaat)
8/17/2012
Natfka
40k, 6th Edition, Chaos Space Marines, Warhammer 40k