Details of the Hell Brute and Other Starter Set Contents 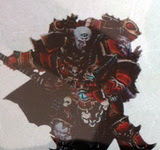 Not only are we getting pictures of the starter set now, but here is a first hand account of the models, including a good description of the Hell Brute.

Just incase you came late to the show, here is the link for leaked starter set pics
http://natfka.blogspot.com/2012/08/leaked-starter-set-pics.html

via (A Must Remain Anonymous Source)
The hell brute is amazing and not in fact a dreadnought! It looks like a bloated dread from the front with a nasty mini defiler gauntlet ending in a wicked hand / claw. It appears to have some kind of cannon for the right hand. Not actually sure if it's a multi melta yet. Any rumors the hell brute is a dreadnought are immediately put to bed by looking at its back. The back is all daemon flesh. the face of the brute is a giant cluster of horns with a gaping toothy maw in the middle opening to reveal a screaming skull warped in agony.

The chaos lord/ sorcerer in power armor has a wicked set of horns and a plasma pistol and daemon sword as big as he is. It's seriously nemesis force sword big.

The 6 chosen have bolters and lightning claw dude and power weapon guy as previously mentioned by other sources. They look right out of the designs for the space marine video game. Not a lot of spikes but a ton of detail on the armor.

The set comprises of:
Chaos (no god specific iconography thus far on models but it does reek of khorne)
-chaos lord
-6 chosen
-18 cultists
- hell brute

I also got to see the terminators. The captain has wings coming out of the top of his armor.