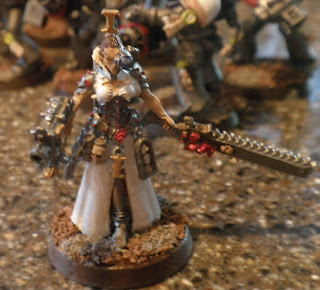 This week was a little crazy when it comes to the rumor mill. There was a ton of information dropped directly to us this week on the site, and at times I was wondering how I was going to get it all posted up before it was outdated information. In fact I didnt get to it all. I was close.


First off, I am not here, nor am I there. I am currently unplugged. yea, I heard all the gasps and whispers of disbelief. I am beyond even phone contact of any sort and have been for the past couple days by now. So you can imagine the catching up I will be doing on Monday when I get back. I also have no 40k books, no pen and paper, so I may just explode.

Dark Eldar
I am overly excited about the few whisperings I have heard regarding a new Grotesque unit. Apparently at Games Day Chicago, someone heard Phil Kelly mention something about a new Grotesque, but it was unclear as to whether it was a new sculpt or a new unit type.

The next exciting thing is that the FAQ that was mentioned, and the possible slip that at least Huskblades will become AP2. I don't know about you, but Archons are something else all together now in close combat. Now that wounds can be kept away from then, and with challenges, archons have gained a serious foothold in the workings of Dark Eldar lists.

Tyranids
We had a release this week that mentioned new tyranid units, and that is a huge relief to hear. Tyranids need a little bit of love, because I miss seeing them on the tabletop. Its been quite awhile since I have gotten to fight Trygons and masses of Gaunts. I want to see this army succeed.

Tournaments
This is going to be a little bit bitchy. Since the arrival of 6th edition I have been greatly disappointed by the community TO's and their lack of courage to play by the 6th edition rules. The way I see it, with 6th edition we should be seeing the following.......

Alternating terrain set ups.
Have all the terrain sitting on the side of the table, and have the players use the rulebook to set up. In fact lets get some real interesting terrain on these tabletops. There are lots to use in the rulebook.

Allies
Most tournaments are allowing allies, however it must be stated that allies are a big part of 6th and should be in.

Double FOC.
This is also a large part of 6th edition, and yet, I keep hearing over and over, that TO's are ignoring this section of the rulebook.

Mysterious Objectives
Its there, lets use it.

I have a deal to make with any tournament organizer. I know its not much, but if you run a real 6th edition tournament (with the rules, and yes including the above), I will advertise the hell out of it. The clouds will part and the earth will be full of heavenly light bathed in the singing of angels.  Really though, I will advertise the hell out of it. Even if that does not mean much in this little corner of our hobby, it will at least reach out to a few people.

Faeit 212 Event
This looks like its going to happen. It will be some time from now, at least 6-10 months out. Its in the early stages at this moment, as there is a lot to do to get this thing moving. So if you are anywhere near the Pacific Northwest, the event will be held in the greater Portland Oregon area. And yes, that is where I live. If you have comments or ideas, this is the time to start with them. natfka@live.com
8/05/2012
Natfka
Presence of Faeit