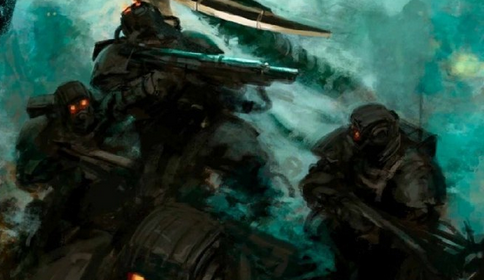 With information now coming for Scion Platoons, we can see that these are definitely a new option for the Imperial Guard Stormtroopers. They come with a lot of new options that now can make a stormtrooper force quite good, and very viable on the tabletop.


Scions very much match the old statlines of the Stormtroopers, and includes a command squad with a Tempestor Prime with a higher leadership of 9. Here are some interesting rules that are gathered from the leaks we have seen.

Militarum tempestus Platoon
Elite choice for the Imperial Guard codex, and contains 1-3 Scion squads and may include a single Tempestus Command squad.

Militarum Tempestus Command Squad
Special Rules include Deep Strike, and Move through cover.
Clarion Vox-net: Friendly units in the same platoon within 18" use the Prime's leadership for fear, morale, and pinning.
Voice of Command: Can issue a single order per turn with a command radius of 12"
Can upgrade 4 Scions from the special weapons list.
Can carry a vox-caster and platoon standard, or medi-pack.
Can take a chimera or Taurox Prime as a dedicated transport

Really the command squad is very tight. They can quickly fill the ranks of your units, and give you great access to special weapons. 4 special weapons per squad is always a good thing, and I can see my Kasrkins quickly getting a lot more use on the tabletop. The ability to give orders, and keep other units in line with extended leadership is an added bonus.

Militarum Tempestus Scions
With hotshot lasguns as their primary weapon, and two Scions being able to upgrade to special weapons, these are very much your old standard stormtroopers. They do lose the ability to take shotguns, and I have been hearing some of this as a modelling issue from readers and other bloggers behind the scenes. Where these guys shine, is that their new Taurox Prime is a fast vehicle with great weaponry, and two gun ports to match up with the Scion special weapons count.

All in all, a great job, and I am loving these new updates. Using Scions as an Elite Platoon will definitely make them valuable, with some creative uses on the tabletop.
3/26/2014
Natfka
40k, 6th Edition, Astra Militarum, Imperial Guard, Militarum Tempestus, New Releases, News Headlines, Rumors, Warhammer 40k