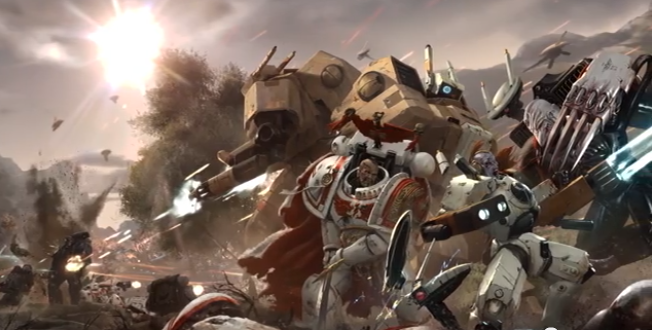 There are two new products available for pre-order for Apocalypse involving the Imperial conflict with the Tau in the Damocles Crusade. Interestingly enough this time around, there is a companion book called Damocles: An Apocalypse Anthology, showing that its very likely that in the future we will see a lot of companion book releases.


These are up for pre-orders now.

What first catches my eyes of course are the White Scars. Still on my list of armies I would love to be playing.

Check out the release video
http://www.youtube.com/watch?v=2M3C0Hp78-Q

Apocalypse War Zone: Damocles
Price:  $33.00
All across the Damocles Gulf planet-wide battles are being fought. Led by Commander Shadowsun, the Tau have returned to reclaim the region they lost long ago. The Imperial Guard, bolstered by White Scars and Raven Guard Space Marines and Imperial Knights, defend the worlds of the Imperium against the Tau Third Sphere Expansion.

Apocalypse War Zone:Damocles is the 4th book in the series. This 68 page, full-colour hardback book includes:

Two centuries ago, the Imperium of Man and the upstart Tau Empire fought to a standstill in the Damocles Gulf. Now, as the 41st millennium draws to a close, the Tau have returned. As the world of Agrellan falls under attack, the White Scars and Raven Guard rush to its defence, but with the skilled Commander Shadowsun leading the alien forces, the Space Marines and their allies are hard pressed. Kor’sarro Khan, Huntmaster of the White Scars, swears that he will win the day in the most direct way possible – by taking Shadowsun’s head.


via an anonymous source on Faeit 212
Armoured Interditcion Cadre will return in Damocles according to Dan Harden.
There will be fluff on the RG chapter master, Corvin Severax. Apparently first time he is described as well in the book.
The IG in the book will be Catachan Jungle Fighters.