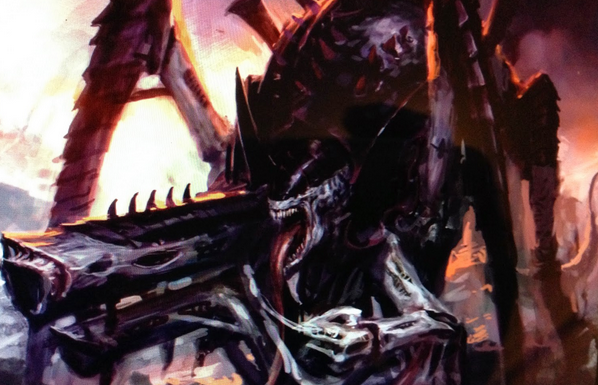 On Saturday the last installment of Rising Leviathan III, Tyranid Onslaught went up for pre-orders. It will include 5 more formations for Tyranids, and today the Black Library gave us some more details on the release. Lets check out what they said.


via Eddie on the Black Library
http://www.blacklibrary.com/new-at-bl/Tyranid-Onslaught.html
Just like the first two data-slates in the trilogy, Tyranid Onslaught contains five new formations. Whilst the theme of the first two could be imperfectly summarized as ‘The Sneaky Tyranids’ and ‘Lots of Tyranids’, the theme of Tyranid Onslaught is most defiantly ‘The Big Tyranids’. Inside you’ll find formations that allow you to field some of the most lethal and largest bio-forms in hive fleet Leviathans’ arsenal, including packs of Carifexes, subterranean swarms lead by Trygons and the monstrous Hive Tyrant himself, protected by fearless bodyguard organisms.

The final Formation is the largest in the series so far, a Formation of Formations.

The ‘Living Tide’ is hive fleet Leviathan’s ultimate solution to the problem of stubbornly in-edible food-organisms (read: enemy armies) and is an army in its own right. The Living Tide is perfect for larger games, or to form the core of an Apocalypse army.


Naturally, these are tense and bloody affairs, as the final Tyranid force seeks to overwhelm the last battle-worn Imperial defenders who are lead by the ferocious Brother Corbulio of the Blood Angels.

The Other Formations in the Dataslate from Previews
From the previews we see can see a little bit of information regarding the 5 formations that this will include.