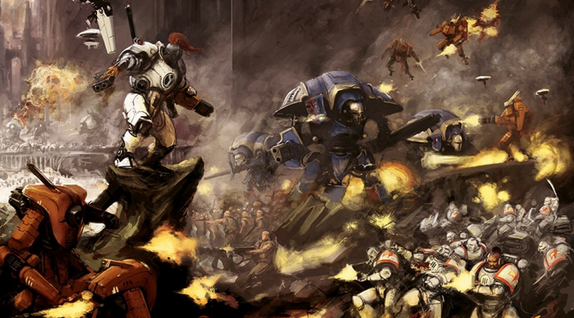 There has been hints and rumors that Forgeworld will be picking up the rest of the Imperial Knight ball, and running with it. While we had a mini-codex for them, with only two units in it a lot of us in the community felt like there was just more to do here. Enter Forgeworld.


I fully expect Forgeworld to do something along these lines, and while that does not alone give credence to this rumor, the rumor does come with the details that seem like they could be on the money.

Please remember that this is a rumor. Some salt is required.

via StrykerSniper on Warseer
Knight Crusader, Castellan, and Lancer
Ok guys, before the inquisitors come for me, I have some Intel from my spies in GW. I have gotten a report of new knight titan variants from Forgeworld.

The 3 alternative knight variants mentioned in Codex:Imperial Knights are being produced as FW kits, with rules to be released in a new IA. The crusader and Castellan will have the same mask, one with a targeter/bionic eye looking bit, a scope/range finder that attaches to the carapace, and alternative weapon arms that are both ranged weapons(which is nice, as my titan seems to get spanked when I try to run in and use my chainblade).

My buddy wasn't sure which guns belonged to whom, but one looked like a laser lance of some sort, and was told it would be along the lines of a long range strength10 ap 1 las cannon, possibly with 2 shots, but DEFINITELY not D. There is also a gatling weapon, not sure if its projectile or las, but they look cool, and the Lancer has smaller armor plates on the legs, and a different head.

Also, to reflect the rare nature of the variants, the pilots are senechals with ws bs5, and a 3+ invul to reflect their prowess (super important since the lancer apparently has less armor, but is faster (fleet from what I'm told).

Take this rumor with as much salt as your like, and this is second hand for me too, but this guy usually isn't full of crap. Also, it seems that FW is doing some commo and banner stuff for the hole in the top of the carapace. I'm super jazzed about these, since as a former epic player, I was disappointed to see so few of the knight variants represented.

Conversion kits, though they may be sold as a full kit, including a knight kit, just like they offer rhino variants and such. But it would be ridiculous to redo an entire kit in resin. Its like the vendetta kit, just extra options.
3/20/2014
Natfka
40k, 6th Edition, Forgeworld, Imperial Knights, New Releases, News Headlines, Rumors, Warhammer 40k