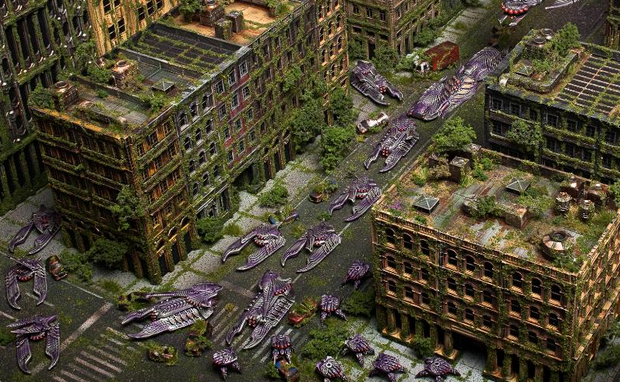 The Dropzone Commander Starter Set starts off new Scourge players with 5 different unit types. Its only logical that we start with these, and get some tactics about them out. I have many games in with all types of Scourge units, but its important to know the most common of them first. 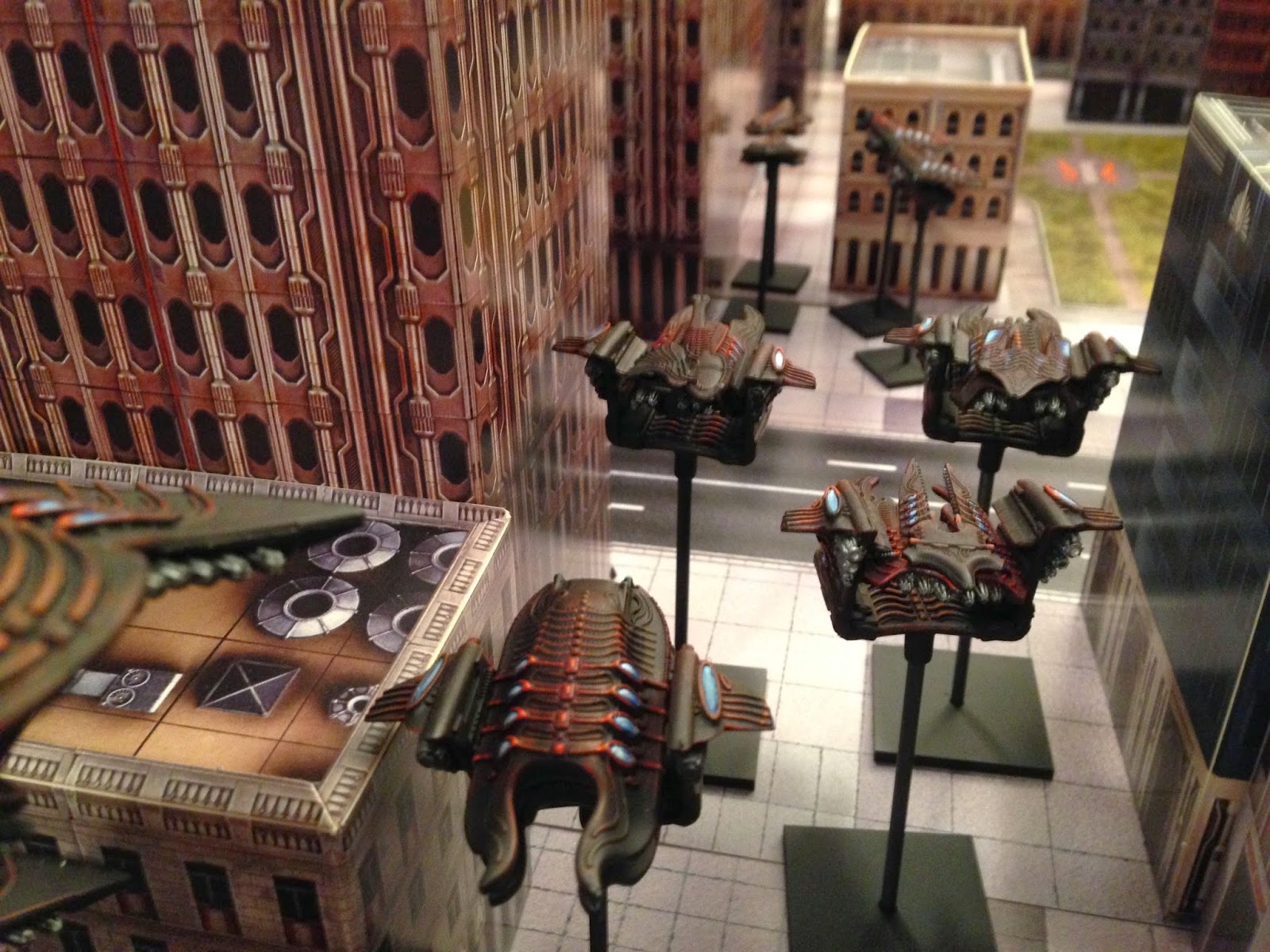 Marauder (Medium Dropship)
This dropship comes with a Plasma Hose and is fully capable of getting in extra E9 shots down upon enemy vehicles in the area, or extra shots at buildings that need to be dropped. The dropship itself is fast compared to other factions and carries a wide number of different cargo.

Having 3 damage points, really can make the difference between life and death of reaching the front line quickly. Where lesser dropships often get taken down quickly, in many games these guys are operating deep into late game. They are fast and really are a bargain dropship at 41pts. 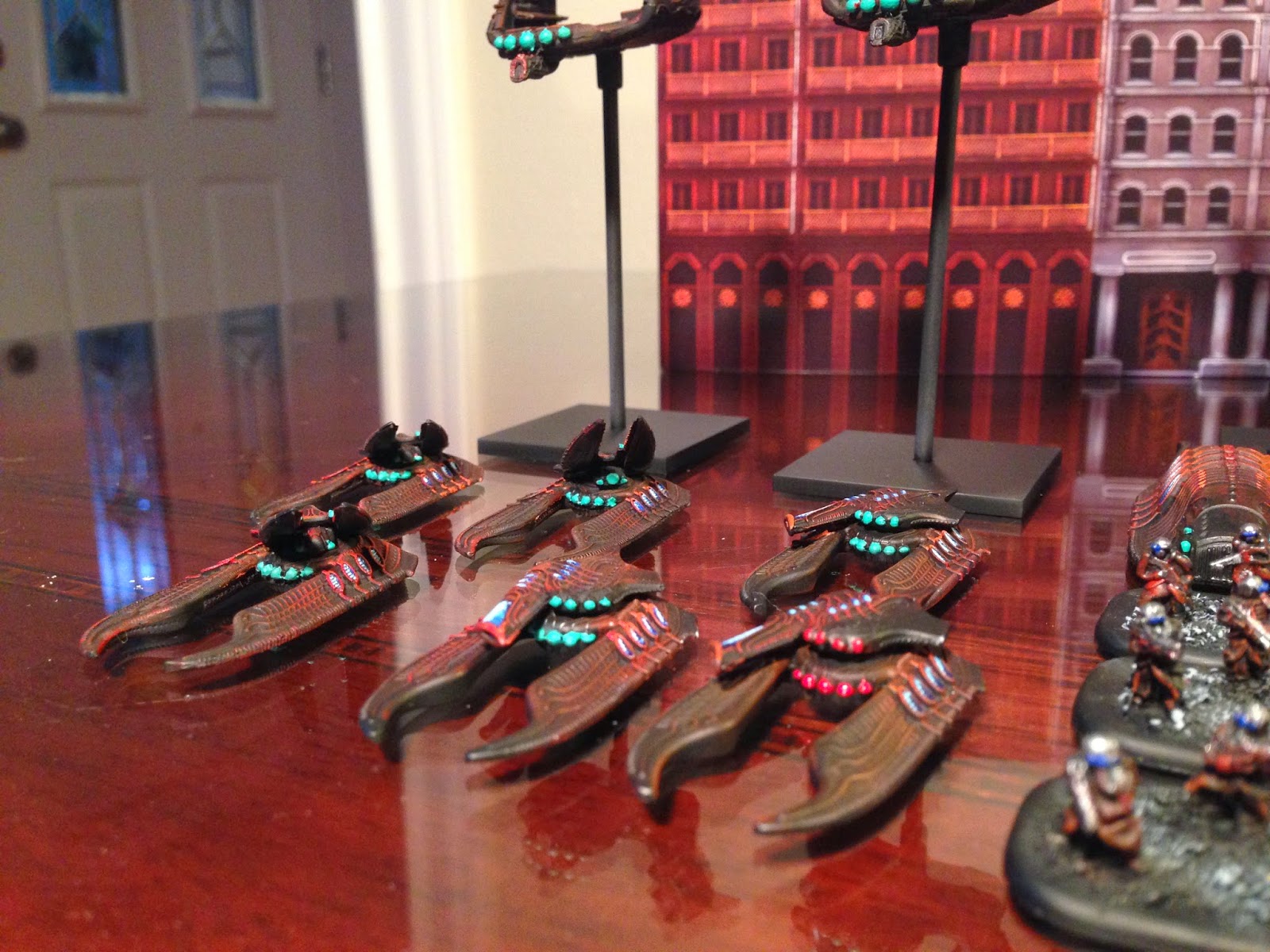 Hunter
This is your main battle tank taking up your standard slots. Its a skimmer, so make sure you when you first drop them onto the battle field, they are not going to get shot at before they get moving. These guys come with an E11 gun with demolisher-2 and an accuracy of 2+.

I really like these tanks, as they can move 9" and rapidly get their shots in. It seems that the Scourge Command decks are just made for these guys, as there are so many different cards to push the limits with Hunters; from +3" MF, to +2 Acc penalty when being shot at, these guys can really change the course of the battle.

I prefer to field them in large squads of 6 or 9. The reason simply because they are able to really bring forth the firepower against an area, and in large squads a single card can make these guys nigh invulnerable. Think of it like this... 9 Hunters fly out into the open to face down a heavily defended area. Hunters are skimmers so give your opponent a +2 Accuracy penalty, and a single jink and weave card, and suddenly even the most deadly of enemy anti-tank weapons now needs a 6+ to hit you. Your opponent has a deadly decision to make.... use up a lot of shots to get rid of these guys, or ignore them for easier to hit targets.

The Hunter has the capability of laying down a nasty salvo of shots capable of ripping apart tanks and buildings alike. 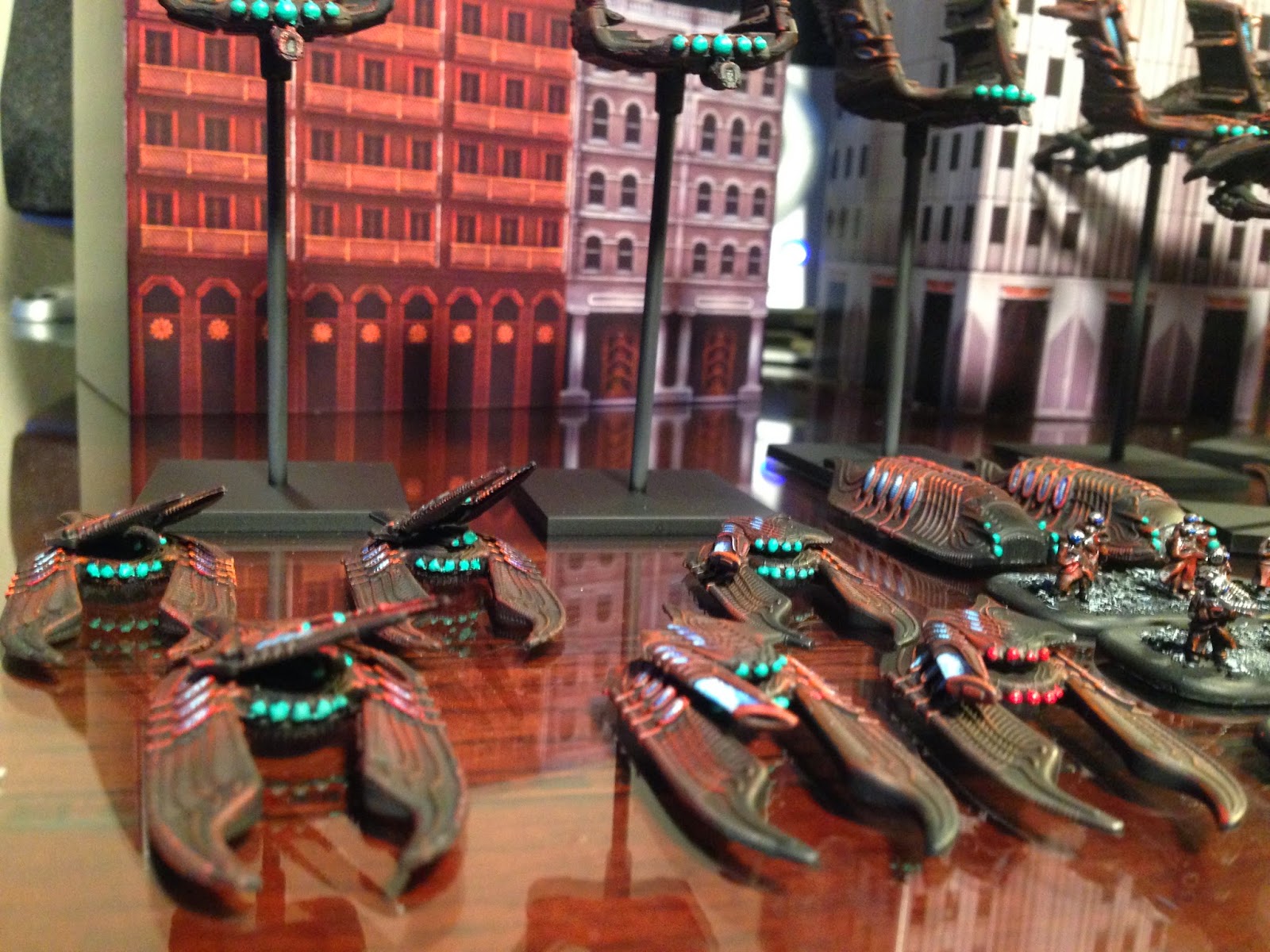 Reaper
The Reaper is the primary anti-air unit of the Scourge. It uses an Arc Caster, and therefore is very specialized at taking down aircraft. The Reaper hits aircraft on a 2+, and ground targets on a 6+. The Arc Caster of the Scourge is also E8, which is plenty strong against all factions dropships and fast moving flyers. These guys really have the capability to take down aircraft quickly. The best part is, they get two shots each.

Once again being skimmers, get these guys onto the field quickly, and get them moving to avoid being caught not moving. They are a support unit, and attach them to whatever battlegroup you need AA support to, but keep them back off the front line. Reapers should be a high priority target for the enemy, as they are excellent at jumping out from behind the nearest building and laying waste to any dropships around. Keep them safe, as these are not the units you want to be sacrificed to the enemy.

On way to keep them safe, is to be following other skimmer units. Since you are a skimmer, if you can get a hull down against enemy fire, they will be hitting you on 6+. For Hull down shots a skimmer only needs to be 10-50% of its model behind something is considered Hull down. So if the Hunters have a Jink and Weave card, throw these guys right behind them, and you will have a forward moving force that will be literally impossible to get rid of.


Warriors
I am going to leave Warriors and their apc the Invader for another day when we are discussing infantry units.

All models in the unit pics were painted by Bluetable Painting.