Scourge Warriors and Aged Ones 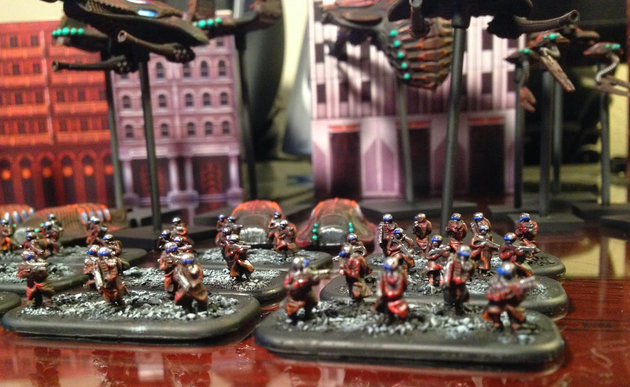 Its often not the skimmers that define the Scourge in Dropzone Commander, but instead the powerful attacks that can be pulled off by Scourge Warriors. The Scourge have a powerful basic infantry unit that is quite devastating to those that are often caught unaware.

Scourge Warriors
The Strength of the Scourge Warriors is in the Plasma Rifles. Scourge can move quickly across the battlefield and once in a building can reign death down upon ground based vehicles with energy 11 shots.

Plasma Rifles work like this..... each base gets 5 shots and if you can pull off 3 hits with them, they can be combined into a single E11 hit. With an accuracy of 3+ and a 12" range, this can turn a high rise into one hell of a firebase. Drop in 6 bases into a center building and watch how quickly anything on the ground moves out of your range.

Using Scourge Warriors aggressively works wonders at controlling the ground battle, and gives you a forward firebase for your Hunter Tanks to search and destroy enemy ground forces.

If you do play the mission that has the special rule "Excellent Vantage Point" your Scourge Warriors will be dealing death at 24", which is literally amazing.

In my lists I prefer to almost always have large numbers of warriors in my armies.

Aged Ones
Aged ones are a dilemma for me. They really add to the cost per base of the Scourge Warriors, but reduce the accuracy of their rifles to a 5+. They are better in close quarter combat, but take damage the same as standard warriors, so once you start losing them things can go downhill really quickly. I have used them several times, and still prefer to use standard warriors.

So instead of taking Aged Ones, just get yourself some more warriors.

Invaders
The Scourge Invader is fast at 6", and if its doing nothing but moving gains an extra 9" of movement. This can come in handy when you are on the ground trying to get an objective off the field, or are using your invaders to secure focal points in missions. Securing focal points with these, really means that your opponent has to deal with them or allow you the extra points.

Dropships for Moving your Warriors.
When it comes to your warriors, there are two ways to get them onto the tabletop effectively. The first one comes with a Marauder Dropship carrying two Invader Apcs and a two squads of 3 Warrior bases. This is the best way at moving lots of infantry on the tabletop. Effectively you are moving 6 bases of warriors and each apc can unload and go different directions.

An Intruder though can only carry two bases of Warriors. While it carries fewer infantry bases, it cost the same number of points (practically) as the Marauder The primary difference is with an Intruder you get some crazy speed on the tabletop and are able to move infantry very aggressively. Its hard to match the furiosity of Scourge Warriors moving this quickly, perhaps backed up by a unit or two of Destroyers.

Dealing with Scourge Warriors
Scourge Warriors cannot be ignored inside buildings. While they fight the same as UCM infantry, their powerful Plasma rifles make this unit hard to deal with on the tabletop.

So how do you get rid of these warriors when facing them. First off, flamers will make short work of them inside of buildings, but I have not seen too many people fielding these. Anti-personal weapons and taking down the building also work wonders. However, dont be surprised when the scourge quicky leave one building only to appear in another.

Your options are to give them space, or take them on directly, as Scourge Warriors cant be left alone. If you just dont have the firepower to battle them, get in for some Close Quarter Battles to lock them up as much as possible. I can tell you there are many ways to deal with infantry inside buildings for the other factions. Just make sure that when making your list you take into account Scourge Warriors setting up firebases.

All models in the unit pics were painted by Bluetable Painting.