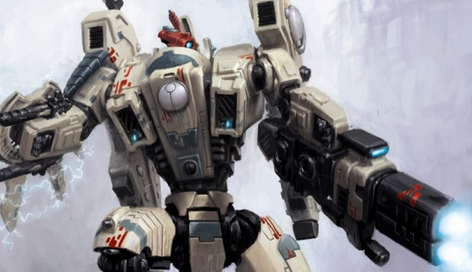 A New Riptide variant is in the works at Forgeworld, and was revealed during conversation at Forgeworld Open Day. This variant has a lot of not yet determined parts, but it seems focused on movement and close quarter fighting.


Please remember that these are being reported as coming out of the event, and as such are still rumors.

via Bitterman on Advanced Tau Tactica forums
http://advancedtautactica.com/viewtopic.php?f=1&t=22304&p=279905#p279905
"I was at the Forge World Open Day today, got chatting to one of the designers who mentioned that he's working on a Riptide variant.

No model was on view yet; but there's talk of it being a highly maneuverable close-quarters suit, designed to jump right into the thick of things and soak up damage with an enlarged shield (perhaps not unlike the XV9 Hazards in role?). Its weapon is to be determined but may be a large Cyclic Ion Blaster, or similar.

I think design has only just started so I guess this is a few months away, but thought you'd all be interested to know that Forge World haven't forgotten about the Tau and there's more love for us in their future!"